Scotland ‘does not need’ any more new golf courses 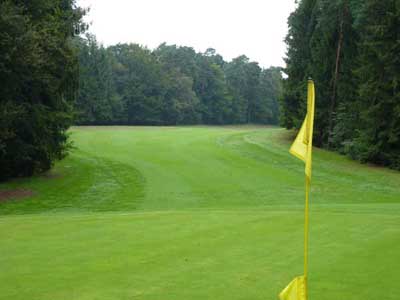 SCOTLAND does not need any new golf courses as the sport’s boom years have firmly come to an end, according to a survey by a golf watchdog.

A strategic plan by the Scottish Golf Union, which represents 580 clubs around the country, is to recommend no more courses be built north of the border.

The revelations come as Whitemoss golf course in Perthshire announced it would close and revert to being farmland.

The organisation says clubs need to focus on existing facilities in the midst of tough economic times.

They also say two tough winters have taken their toll on Scottish courses, which have had to shut their doors for up to a month at a time.

The Union’s chief executive said more closures would not be surprising.

While where has been a 20 per cent growth in Scottish courses since the early 1990’s, there are no more people playing golf now than there were then, according to the union’s chiefs.

The full findings of the Scottish Golf Facilities Plan, which saw over 90 per cent of the Union’s 580 member clubs take part in a survey, are due to be published next year.

A statement from the Scottish Golf Union said: “Golf Clubs in Scotland, like many businesses, are having to adapt to the continuing, difficult financial conditions.

“The reality is that in the past 20 years there has been almost a 20 per cent growth in golf courses throughout Scotland.

“Yet, after the impact of the economic downturn, there are no more people playing than there were before this growth in facilities.

“Undoubtedly, some clubs are struggling and Whitemoss, in Perthshire, is an example, given that it is reverting to farm land for economic reasons.

“There may be other clubs who also endure problems in the future.

“The soon-to-be-published Scottish Golf Facilities Plan will undoubtedly state that Scotland does not need more courses.

“Instead investment in existing facilities and innovative programmes is necessary to introduce new players and retain existing players.

“Importantly, it’s not just about financial conditions. The inclement weather in Scotland has as much to do with the tough times as the economy.”

But the Union said some clubs were showing an increase boost in members, and it was aiming to boost interest in the sport through education.

The statement continued: “While national figures showed a reduction of 1.4% in adult male membership in 2010, reducing the decline against the previous year, 40.4% of Scottish clubs grew their membership in that year, illustrating how well many clubs are adapting to trying times.

“It’s encouraging to see clubs that innovate and are creative grow their membership, with the SGU working hard to support clubs with advice and tools.”

Hamish Grey, chief executive of the Scottish Golf Union said: “When you look at the figures for growth in clubs against growth in members, the maths doesn’t work.

“I can’t say it’s inevitable that courses are closing, but I wouldn’t be surprised to see more closing. Many clubs are not run as a business.

“I think all clubs should be looking at their own circumstances.”

He said it wasn’t just local courses which were being hit by difficult economic times: “I don’t think you can generalise like that. These factors are hitting everyone. They’ve all got the same challenges.”

But he said US billionaire Donald Trump’s forthcoming golf course near Aberdeen would bring benefits to the area.

He said: ”I won’t be drawn on individual cases. But the reality is it will bring more people into the Aberdeen area, it will be a benefit to the local economy and courses in that area.

“Green fees can account for just 30% of a golf club’s takings, so there’s a lot of other things courses can be looking at.

“Visitor income accounts for 60% of some club’s revenue, it’s what makes some clubs viable. Golf tourism is very important.”

Mr Grey said each case needed to be taken on its individual merit.

He said the loss of courses like Whitemoss, which will revert back to being sheep-grazing land after being converted from a farm in 1992, was regrettable.

He said: “No one wants to see courses closing, so yes it’s a shame. But I would say to any members of that club that there are many other clubs nearby.

“It’s a challenging time, but it’s not all negative.”