A TV-loving duck has been giving its marching orders by hard-hearted Scots council chiefs.

Ducky was born and raised by James Anderson at his home in Eyemouth, Berwickshire, where she enjoyed nothing more than relaxing in front of the telly with the family.

When she got too big – and messy – to live with her owners, Ducky was transferred to a new home on James’ nearby allotment.

But the local council has now ruled that while chickens are permitted on the allotment, ducks and other fowl are strictly forbidden.

James, 32, is determined that Ducky will not become homeless – or anyone’s dinner – and has already raised almost 200 signatures for a petition to let the bird stay.

Ducky arrived in Eyemouth in April as part of a batch of duck eggs which James bought on eBay.

As the only chick to emerge, Ducky won a special place in the family, particularly with James’ niece Jessica, four.

He said: “She is very humanised and doesn’t like to be left on her own so she would sit on a bean bag and watch television. She particularly liked children’s programmes, probably because of the noise.”

By three months, Ducky was too big and smelly to keep inside the house so James converted a shed at his allotment in to an aviary.

James insists he was given the green light for the plan at a meeting attended by councillors.

Three other duck owners in the area moved their birds to the allotment.

James said: “They have free run of the allotment for an hour a day and once a week we walk them around the perimeter.”

The happy community of ducks and allotment owners was thriving…until the bureaucrats at Scottish Borders Council found out about it.

The council wrote a stern letter to James and the other plot holders telling them it was forbidden to keep ducks, geese or pigeons at the allotment overnight.”

The other three duck owners have removed their birds but James is standing firm.

Ducky would not survive in the wild, said James, and eating her for Christmas dinner is off the menu. “You wouldn’t eat your pet dog or cat,” he said.

James said that when he met councillors  “neither had anything negative to say about my proposal so for the council to have done this has come as a big surprise”.

“The first time she was only two days old but I took her in again when she was six weeks old and the children all want to know how she is keeping.

“They are due to visit the allotment in the spring to see how she is getting on and I really hope she’ll still be there.”

James, who has raised 182 signatures for his petition, said the ducks were good for growing vegetables.

He said: “Having the ducks on the allotment has a number of organic benefits, one of the main ones being that they are good for slugging.

“I’ve sent in a five-page proposal to the council outlining all of the positives but I’ve yet to hear back. 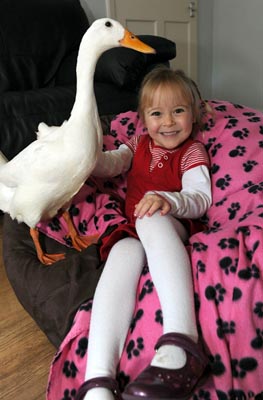 Scottish Borders Council said: “Currently, only chickens are allowed to be kept on site. The Council has at no point, verbally or otherwise, agreed to let anything but chickens on the allotments.

“We don’t anticipate any changes to the terms of the lease in respect of other poultry being allowed on the site.

“However, we welcome any correspondence from Mr Anderson or any other members of the local community.”