A WOMAN has died following a disturbance in the centre of Edinburgh.

Police were called to flats in the West Tollcross area of the city at around 6.20pm yesterday.

The 32-year-old female victim suffered serious injuries to her upper body and was treated by ambulance crews but later died. It is believed she was stabbed.

The woman was found by police officers in the common stair of the flats following a call from a member of the public.

A second woman was taken to hospital and treated for minor injuries.

Police say they have arrested a 28-year-old man in connection with the incident and are appealing for witnesses.

The scene was just yards from the city’s King’s Theatre where hundreds of families, including that of writer Ian Rankin, were enjoying a pantomime.

The Rebus author took to the social media site Twitter after a friend told him about the incident.

Under the username @beathhigh, he wrote: “Ouch. Cop pal just texted. Been a murder near the theatre. Shocker…”

Before later adding: “I took a detour past the crime scene. SOCOs suited up; everyone very professional, very sombre.”

The area has now been cordoned off by police while they further investigate the incident. 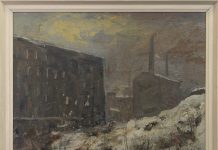 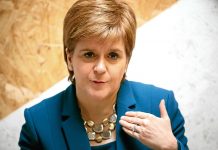