A SCOTS curry house has promised next Wednesday will be a third degree Burns night – after creating the world’s hottest haggis.

Kismot in Edinburgh, whose ‘killer’ curry put two over-ambitious eaters in hospital last year, has created the unique blend of curry and haggis for the Bard’s birthday.

On Burns Night next week, diners can put their stomachs to the test by trying a Kismot Killer haggis curry, or opt for milder sauces if they don’t have the nerve.

Haggis naan bread and neep and tattie bhajis will also be on the menu.

Abdul Ali, who runs Kismot in St Leonard’s in Edinburgh, said: “There’s going to be a lot of burning on Burns night!

“It’s without a doubt the world’s hottest haggis.

“It’s about bringing the traditional Scottish meal into the restaurant.

“It’s a symbol of Indian and Scottish culture coming together.

“I think we’re definitely going to keep it on the menu permanently.”

Abdul and his wife Riana created the curry after she complained of not having enough of her favourite dish after the couple married four years ago.

Riana, 22, said: “I love haggis, it’s my favourite food. I had it loads as a kid but I’ve not had it that much after we got married.

The Kismot Killer haggis curry itself can take an eater by surprise.

A foreboding brown colour and topped with threatening brightly-coloured chillies, it has a sharp aroma.

For the first two seconds after being put in a diner’s mouth it has a slightly sweet fruity taste.

This is soon followed by an overwhelming stinging sensation, which continues down a diner’s gullet as they swallow.

The food has to be quickly washed down by large amounts of water and milk.

Abdul also hopes the blend of haggis and curry will introduce the traditional Scottish food to the subcontinent, just as curry was brought here.

As the restaurant is halal, the haggis will have to be vegetarian.

Abdul said he had trouble sourcing halal haggis so he used vegetarian haggis for the new menu, though added it tasted just like the meat version.

Riana, who works in a hospital, said: “If you like curries and you like haggis, you can’t go wrong with it.

“The only part of Burns night we can’t do is the whisky!”

Kismot, a family run restaurant, is keen to avoid a repeat of the incident last October where two people were hospitalised after a curry-eating competition. 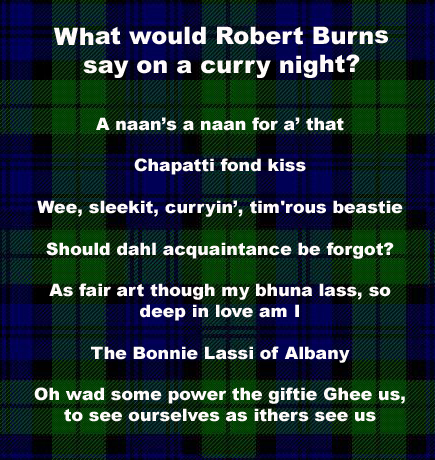 Abdul said: “We do background checks on people that want to eat the Kismot Killer now.

“We ask them what they usually eat, look at their body language and so on.

“We’ve had some cowboys who haven’t even finished one spoonful.

“We obviously don’t want a repeat of people going to hospital!”

Contestants were challenged to eat bowls of the Kismot Killer curry in order to be crowned Scotland’s curry king or queen.

Beverly Jones, 53, from Edinburgh, is the reigning queen after making it through five rounds of the curry.

The curry uses a potent blend of dorset naga, joloqia and ghost chillies.