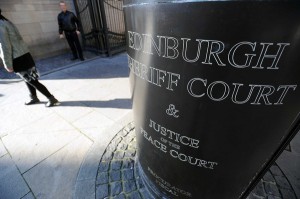 A 24-year-old man has been sentenced to 2 years in prison after threatening to kill a man in his own flat.

Mr Marney, as he was referred to in court, has been in custody since November 16, 2011 and was sentenced today at Edinburgh Sheriff Court by Sheriff James Scott, following an incident that occurred in November last year.

The incident that lead to the sentencing happened around 8pm on November 15, while Marney was at his home in a block of  flats situated in the Edinburgh area.

The victim of the incident, revealed only as Williams, also lives in the same block of flats.

Marney was drinking cider and eventually became highly intoxicated, and started becoming aggressive towards those around him.

At one point in the night, Marney said that he was going upstairs to “kill Williams”, claiming that he was a rapist.

Marney took a knife and made his way up to Williams’ flat. On his way up he passed two other residents, one of which was named as Hunter, but the other remained unnamed , and told them that Williams was a child abuser and a rapist who deserved to be beaten up and killed. Hunter and the unnamed resident accompanied Marney upstairs to Williams’ flat.

After breaking into the flat, the men proceeded to beat up Williams, until Marney drew the knife he had taken and placed it to Williams’ throat, violently threatening him. He then forced Hunter to punch Williams, and then forced Williams to punch Hunter.

Marney then escaped the flat, only for Williams, Hunter and the unnamed resident to report the incident to police forces the following day, where he was then arrested and brought into custody.

Sheriff James Scott sentenced Marney to 2 years in prison, citing his previous record and agression during the incident as more than a cause for the sentencing.

Marney was also sentenced to community service in 2004 following a similar incident.