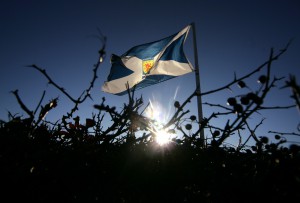 HISTORIANS are claiming residents of a former English mining town should be allowed to vote on Scottish independence, after research shows the town still belongs to Scotland.

Two local historians from Doncaster, hometown of Jeremy Clarkson and singer Tony Christie, made the discovery after researching Anglo-Scottish hostilities from 900 years ago.

Their research shows that Doncaster was handed to Scotland with the signing of the Treaty of Durham in 1136 and another treaty three years later also confirms Scottish ownership of the Yorkshire town.

New research by the two historians shows there is no official confirmation that ownership of the town was ever handed back to England.

The Mayor of Doncaster, Peter Davies, said the people of his hometown should be allowed to vote in the SNP’s independence referendum.

He said he would be “delighted” if the people of Doncaster were given a vote, even suggesting he would vote in favour of Alex Salmond’s party.

Mr Davies, who represents the English Democrats, said: “We would be delighted to take part and if I did I would probably vote for Mr Salmond.

“I think he is a top politician in the UK at the moment. But this is all very new to the people of Doncaster – the realisation that we might still be part of Scotland.”

Local historians Peter Robinson and Charles Kelham, who made the discovery, found that in 1157, Henry II of England simply took back the area that belonged to the Scots, but failed to produce any documentation to make it official.

Mr Robinson, who is a museum officer, said that Doncaster still had relics from the time.

He said: “We have Kind David coins dating from that time found in Doncaster so the links are certainly there.”

The SNP said the residents of Doncaster must of been delighted to discover their unexpected roots in Scottish heritage.

A spokesperson said: “And even although they won’t be able to vote in the independence referendum, it will be little wonder of people in the town – and other parts of England are casting envious glances up north, given the popular policies of the SNP Government compare to the stale fare on offer from the Westminster parties.”