A BUNGLING robber was recognised by shop staff after his home-made balaclava failed to hide his identity.

One worker even referred to hammer-wielding Oliver Nicholson by his first name during the raid, adding: “I know it’s you”.

The hapless 21-year-old decided to rob a newsagents where he was a customer, wearing a mask fashioned from a bobble hat. 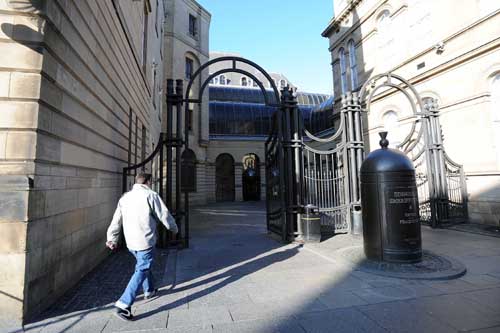 Nicholson asked to be remanded in custody  © 2010 Deadline News

He  threatened the woman with a hammer and robbed her of £350.

He said the shop worker “immediately recognised him as the accused as he was a regular customer in the shop and indeed had been in the shop earlier that day”.

Mr Kirk added: “He demanded she opened the till, to which she replied, ‘Oliver I know it’s you.’

“The accused responded by saying ‘It’s not Oliver’ and at that point showed he had a hammer and held it up.”

He then took £350 from the till, the fiscal depute added.

He said: “The accused is known to the staff in the shop and despite the balaclava they recognised him.”

Sheriff Deirdre MacNeill said: “This is a shocking and inept offence.”

Nicholson’s defence agent, Graeme Runcie, clarified that the disguise was actually a bobble hat which had been cut.

He said: “I am not instructed to ask for continued bail here.”

Addressing the sheriff directly, Nicholson said: “I just want to be remanded.”

He said he was living in shared accommodation hostel.

He told the court: “I told them today I thought I was getting the jail, so basically if I’m going back I would be homeless.”

After being remanded, he told the sheriff: “Thanks your lady.”