A HEAVILY-pregnant woman has been given a police award after she turned crime-buster in the middle of the night.

Lesley Moonie was eight months pregnant when she got up in the middle of the night to go to the loo – and spotted a man vandalising her neighbour’s Ferrari.

The 31-year-old raced in to the street, grabbed crucial evidence of the crime, and then jumped in to her own car to pursue the suspect.

Her actions helped police catch the culprit, who received eight months in jail. 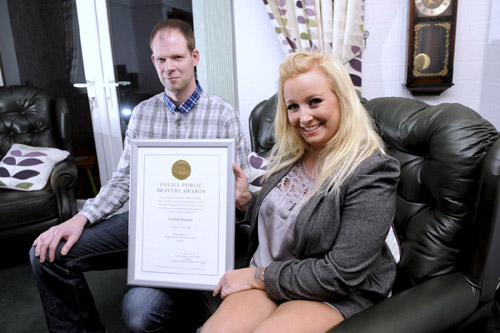 Lesley, pictured with husband William, was eight months pregnant when she chased down the vandals

Lesley, who lives in West Inch, West Lothian, has now been honoured with a National Police Public Bravery Award.

She said: “It was about1.30 morning and I had got up to use the toilet.

“I was quite restless as I was heavily pregnant and if I’m being honest, I am so nosey that I peeked out the blinds to see what was going on in the street.  It’s very like to me to do that. The neighbours always call me Miss Marple.

“I saw the guy scratching cars across in my neighbour’s driveway, a Ferrari and a Fiat.  Walking from one side to the other, scratching the cars from back to front and all the way around.  I could see a woman too.

“I tried to phone my neighbour straight away and I woke my husband, who chased after them.”

She added: “Outside, I saw that my own Mercedes was scratched. I was furious. Most of the cars were nice cars, and I think there was an element of jealousy to it.

“I went a bit CSI, scooping up any evidence I thought could be useful in a Tesco plastic bag. “

The expectant mum then jumped into her car and drove until she found her husband, William, arguing with the suspects on the street.

“I jumped out of the car and found them yelling and screaming at William. Then they ran off behind some houses and we got back into the car.

“The police did tell me to go back home but I knew if we lost the trail we might not have found them, so I followed in my car and started driving around the neighbourhood looking for them. We were so angry, we didn’t want them to get away with it.”

The former accountant said that the police received a call from a taxi driver who had spotted the suspects hiding behind his wheelie bins.

The police then arrived on the scene within seconds and made the arrest. 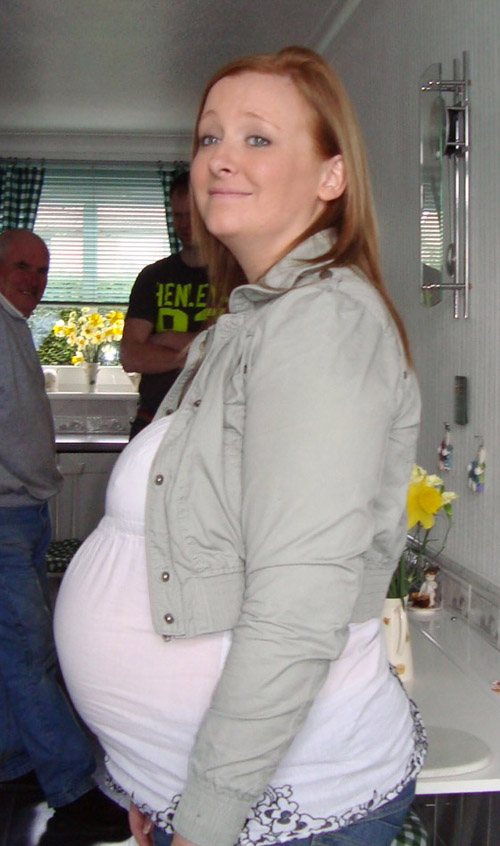 Son R’ian was born just a month after the incident

Despite the excitement of the evening, R’ian was born without complications and perfectly healthy a month later.

Lesley said: “It was so stressful and we were just so angry about the whole thing but it didn’t bring on the pregnancy thank god. R’ian was actually ten days late after all that.”

“I was raging and a lot of people on the street paid for the damage out of their own pockets because we didn’t want the insurance premium to go up on the street.”

Husband William said he would react the same way if faced with the same situation.

“I didn’t even think about giving chase. I was quite calm, I think the adrenaline was going through my body. I’d do it again because I don’t believe you should look the other way.

“R’ian is quite outgoing and talkative, and I hope he grows up the same way.”

Superintendent Graham Jones, who presented them with the award for their brave actions in 2009, said: “I am delighted to present this award as both Mr and Mrs Moonie put themselves at risk by following and confronting the suspect- particularly Mrs Moonie, who was heavily pregnant at the time.

“Without their quick response, the damaged cars might have not been discovered until the morning, and tracing the suspect might have proved very difficult, so we are very grateful for their intervention.”

Following the incident, Mark Mckenzie, 21, was jailed for eight months. He had been on a vandalism spree in which over 100 vehicles were damaged.