TWENTY five firefighters battled a blaze that ripped through a derelict hotel since early Monday morning.

The fire broke out at the former Gartwhinzean Hotel in Powmill, Perthshire, at around 5am.

The hotel has lain empty since it closed several years ago and was believed to have been unoccupied at the time of the fire. 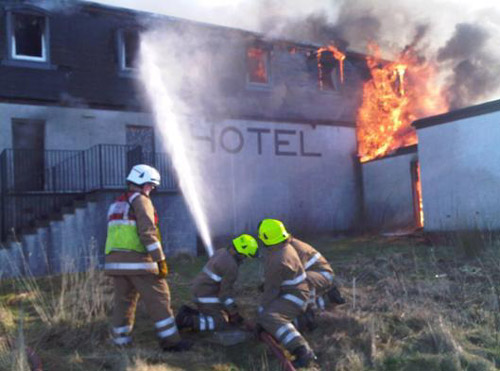 The construction of the hotel meant the fire spread easily and took 25 firefighters several hours to control   Photo:Tayside Fire and Rescue


On arrival, Fire crews were faced a fierce fire with flames leaping through the roof of the main building of the hotel.

Firefighters using four water jets and a water tower from Perth Fire Station’s Aerial Rescue Pump tackled the blaze, however, due to the age and construction of this building the fire was able to quickly spread to the annexes of the property consuming the whole building.

Tayside Police were called in to close the A977 to traffic as a result of the smoke from the fire.

Station Manager Neil Kerr from Perth community Fire Station praised the actions of all those involved, “This proved to be an extremely difficult fire to tackle, the windows and doors of the property had been boarded up hindering access and delaying crews from applying water directly onto the fire”.

The electrical and gas supplies have long since been cut off to the property, the fire is therefore considered to be suspicious. Police Scenes of Crimes Officers and Fire Investigation Officers will carry out an investigation into the cause of this fire.