BUNGLING tram workers brought yet more chaos to Edinburgh yesterday – after they sliced through a major power line during the rush hour.

Scottish Power confirmed the power cut at the east end of Princes Street had been caused by the city’s notorious tram works, which have already caused years of disruption and are massively over budget. 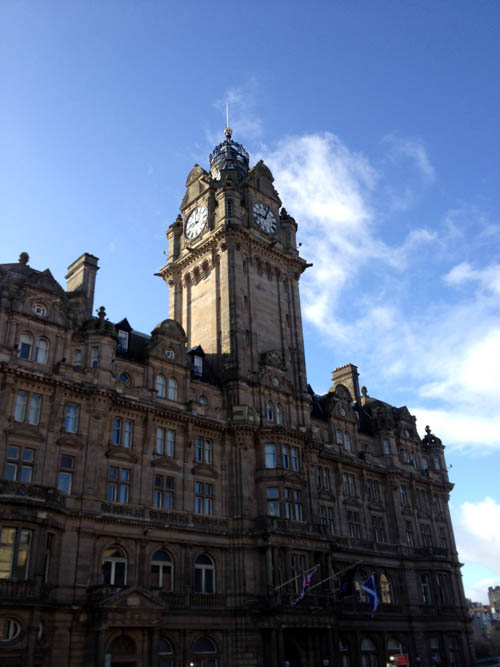 Guests staying at the £500 a night Balmoral were plunged into darkness.

Breakfast service, guest check in and check outs were all interrupted.

The famous Balmoral clock, which always runs five minutes fast to stop travellers at next door’s Waverley Station missing their train, stopped at 9.05am, the time when tram workers damaged the power cable.

One disgruntled Balmoral worker, who asked not to be named, said: “We’ll probably have people stuck in the lifts.”

A spokesman confirmed: “Like the rest of central Edinburgh, St Andrew’s House experienced a power failure for a short period this morning.”

A worker at Register House, which keeps the nation’s records of births, marriages and deaths, confirmed they had been closed down for two hours.

The member of staff said: “The power cut caused major disruptions and all members of public had to leave the building because of fire safety. All the power went down and we had to get electricians in.” 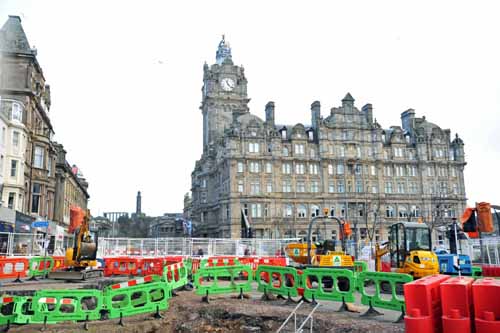 The nearby Disney store was one of several shops plunged briefly into darkness.

Scottish Power confirmed the power cut was due to tram workers damaging a vital power cable.

The spokeswoman added: “The cut was due to a cable fault due to another party who damaged the cable. It affected approximately 100 customers and we had a unit on site. Power is now back on and we apologise to customers for the delay.”

A spokesman for Edinburgh City Council confirmed the tram works had caused the power cut. A spokesperson said: “We can confirm that a power outage took place on Princes Street at around 9 o’clock this morning.

“Power was restored at 10:15am. We would like to apologise to all those businesses and residents affected.”

The remaining works will take place between now and the expected completion date of summer 2014.