FIRST Minister Alex Salmond today welcomed the announcement that Edinburgh will be home to the headquarters of the new UK Green Investment Bank.

The First Minister said: “I am delighted that Edinburgh has been chosen on its merits as the headquarters for the Green Investment Bank.

“The decision recognises Scotland’s position at the vanguard of the renewables revolution and follows an excellent and professional bid campaign. It is great news for Edinburgh’s economy and for Scotland’s thriving low carbon sector. 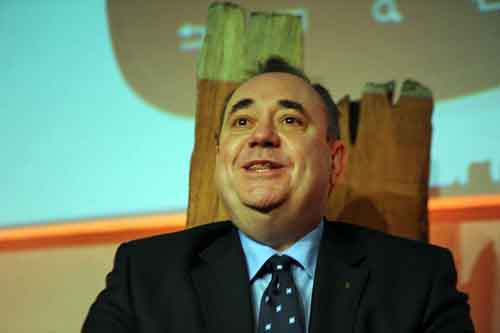 “It demonstrates the effectiveness of the unity built across the political spectrum, across all parts of Scotland with support from Glasgow and Edinburgh City Councils, and across our Universities, to argue Edinburgh’s and Scotland’s case, and also the importance of the £103 million from Scotland’s Fossil Fuel Levy that we agreed to support the capitalisation of the Green Investment Bank.  This is a good early return on Scotland’s investment.

“In terms of green energy, the UK needs Scotland’s target of 100% of Scottish electricity demand coming from renewables by 2020 in order to achieve Westminster’s targets under the Renewable Energy Directive – Scotland is estimated to contribute 30% of the UK’s renewables target.

“Edinburgh is the only location to bring together both finance and the clean energy industry in a single location, and has an unrivalled concentration of industry skills and experience, a point made clearly by the leading role played by our Financial Services Advisory Board.  It makes every sense to locate the Green Investment Bank headquarters in Edinburgh, and now we must all get to work on the crucially important job of channeling investment into low carbon projects to move the sector onto a strong commercial footing.

“Now that this welcome decision has been made, I look forward to the establishment of the headquarters in Scotland, and to receiving details of the number of new jobs it will bring and the bank’s structure.”