A MAN has died following a three car smash in Edinburgh.

The 30-year-old was a passenger in a Subaru which collided with a Renault Clio and a Peugeot Boxter on the city’s Maybury Road at around 7.40pm on Wednsday.

The 28-year-old male driver of the Subaru was taken to Edinburgh Royal Infirmary suffering from a suspected broken pelvis. 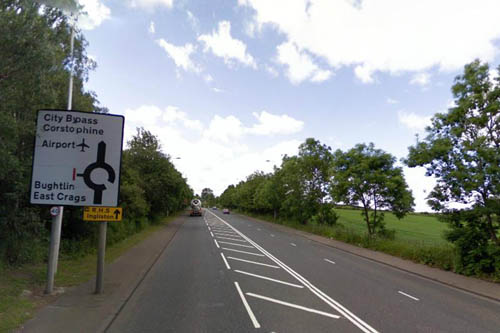 The crash happened north of the Bughtlin roundabout

The 46-year-old Peugeot driver was hospitalised with a suspected broken collarbone, while the 58-year-old Clio driver suffered whiplash.

The road was closed for about 5 hours while accident investigations were carried out.

Lothian and Borders Police are now appealing for witnesses to the crash, which happened around 75 metres from the Bughtlin roundabout.

Inspector John Beresford said: “We are currently working to establish the circumstances leading up to this collision. We understand the Subaru was travelling northbound and the other two vehicles were travelling southbound, and would appeal for anyone who may have seen these vehicles in the lead up to the collision to speak to police.”