A CYCLIST who died after he collided with a taxi had previously survived a murder bid, it emerged today (Fri).

Bryan Simons, 40, was killed in the road accident on Monday, just days after the woman who tried to murder him was jailed.

Father-of-five Mr Simons, Edinburgh, was at Glasgow High Court when Mikita Thompson, 26, was jailed for stabbing him and puncturing his lung in a row about a stolen purse. 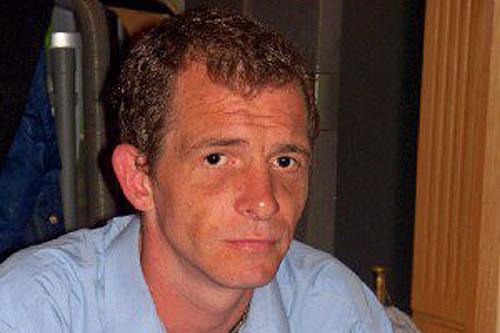 Cyclist Bryan Simons had previously been stabbed in a murder attempt

Mr Simons’ friend David Horgan was also severely injured and is permanently disfigured after the attack at a flat in Edinburghin May last year.

Now, Mr Simons’ ex-partner Marie Brodie, 37, said she knew of the court case but said Bryanwould not have been worried about it.

She said: “He wasn’t the type of fella to let something like that shake him up.Bryannever let life get him down, he enjoyed it to the full.”

The couple broke up over a year ago but previously lived together at West Pilton Park, Edinburgh.

Following the break-up, Ms Brodie went to live in Kent with their seven-year-old son and a child from a previous relationship.

Ms Brodie only learned of Mr Simons’ death when a friend called her on Monday with the bad news.

She said: “I thought they were kidding me on. Straight away I rang the police helpline and couldn’t believe it when they confirmed it was him. I still can’t believe it to be honest.

“He’ll be terribly missed by all the kids and myself, my youngest son is devastated by the news. We may not have spoken in almost a year but we did have some good memories from our time together.”

Mr Simons is the fourth cyclist to lose his life on Edinburgh roads this year, and his death has prompted Scotland’s Transport Minster Keith Brown to pledge to improve road safety in the city.

Two months ago, Andrew McNicoll was killed on Lanark Road.

While last spring, Craig Newton, 32, from Mussleburgh died when he was hit by a lorry outside Broughton Primary School.

OAP Audrey Fyfe, 75, also died after a collision with a car in Portobello Road last August.

Ms Brodie added: “Bryan was always out and about on his bike so if something positive can come from his death to improve the safety of cyclists then that would be great.”

Family of Audrey Fyfe to lead 3,000-strong ‘Pedal on Parliament’

Own goal as Celtic ‘keeper gets speeding penalty