A TEAM of thoroughbred stallions are leading a double life – transporting deceased Scots  at horse-drawn funerals during the week, and then charging around a race track at the weekends.

Fred, Hector, Norman and chestnut Maney earn their keep from the growing number of Scots who want a stately send-off for their loved ones.

The horses, based in Biggar, South Lanarkshire, can be trusted to behave impeccably as they gently bear the departed through the streets of Scottish towns and cities at a steady trot.

But at  weekends, they are transformed into a fearsome racing machine, galloping around a punishing obstacle course in the hotly-contested sport of carriage driving.

The 15km race against the clock involves navigating obstacles at 20mph.

Since starting competition two years ago, the team have made their way to the middle of the UK league and owner Andrew May has his sights set on international competition with the GB team.

Thankfully, says Andrew, 37, the horses never mix up their funeral and racing duties.

He said few horses have the breeding and discipline to manage a funeral competition and high-speed competition.

The team – worth £100,000 – are the only in the UK that compete in carriage driving while holding down a “professional” job.

“You could say they lead a double life,” he laughed.

“They have exceptionally good temperaments.

“I think given the choice they would prefer bolting around in competitions than funerals, but they seem to be able to split the two.” 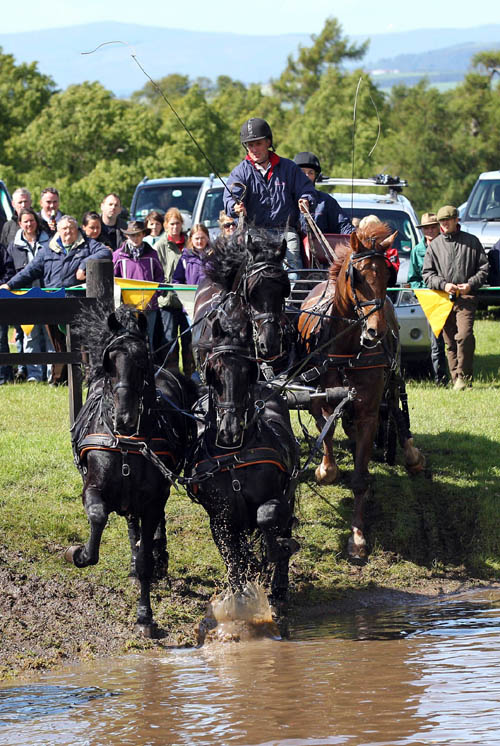 He added: “The training is quite similar, even when they’re charging they have to be quite disciplined and responsive.”

The horses are all stallions, as gelded horses tend to lose their colour in later life, and completely black horses are needed for the sombre funeral processions.

The sport of carriage-driving is highly competitive, with huge sums of money involved in buying and selling the horses.

The marathon competitions involve navigating through obstacles at 20mph where small balls are placed on top of pillars.

“There’s no jumping involved but if you hit something and knock the ball off, you get a time penalty,” explains Andrew.

He said: “They’re middle class in terms of how they compare to other horses, but they’re improving every time we take them out.

“It’s quite a competitive world, you get people entering from all over the country.

“This year is the world championship and they’ll be selecting the British team.

“Because it’s a selection year it’s even more expensive, there’s a lot of resources being put into it.”

Andrew is totally confident he can use the horses at a funeral without them treating every set of road works as a slalom course or wanting to dash through the nearest stream.

He and his partner, Susan Dunlop, have provided the horses for funerals for the past five years and not had a single mishap.

“We do some travelling peoples’ funerals but the majority are just ordinary people,” he said.

Andrew said a lot of the interest in horse-drawn hearses is down to soap operas, which have featured them in the past.

“70% of our funerals are inspired by Coronation Street, 20% are for families that have a connection to horses, and 10% are travelling families,” he said.