One of Scotland’s top outdoor attractions has been forced to close by January’s gales – just two years after it opened.

100mph winds totally destroyed Go Ape, at Beecraigs Country Park, West Lothian, and operators, working out it would take three years to repair, decided to shut it instead.

The popular attraction opened in 2010 after a lengthy campaign to secure planning permission. 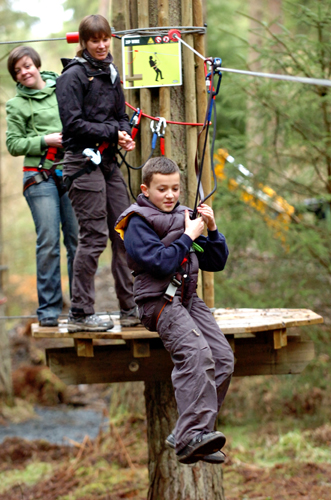 11 year old Douglas Morrison takes to the zip slide as he tries out the aerial assault course.

The freak weather conditions tore down almost 100 trees and completely destroyed the centre’s infrastructure, making it unsafe for use.

The treetop trail was popular with thousands of young people who used the facilities, as well as businesses using the centre for team building days.

But bosses inspecting the site said it will take at least three years to fully repair the site and get it up to proper safety standards.

The loss of sheltered trees at the site means much of the above-ground course is exposed to the wind.

Course manager, Stewart Deards, said: “Following the storm damage, the decision has been taken to close and remove Go Ape Beecraigs. The trees that remain will now be facing wind directions that they have not grown with and therefore are susceptible to further storm damage.

“It will take them at least three years to stabilise again by growing new root systems.”

Managers say they are looking for alternative sites in the Lothians to build a new adventure park, and that Edinburgh Council have vowed to help them find alternative locations.

The site featured Go Ape’s biggest Tarzan swing in the UK and the longest zip wire, which measured more than 275 meters.

Full time workers have been re -employed by the company at its other locations at Aberfoyle and Loch Lomond, but three part time staff have lost their jobs.

Jerome Mayhew, Managing Director of Go Ape said: “Having spent the last few weeks clearing up the damage it has become obvious that we cannot construct an adequate replacement course that maintains out high standards.

“We are now looking at alternative local sites because we know how popular the course was with locals and visitors alike.”

100mph winds thrashed much of Scotland on January 3, causing millions of pounds worth of damage. Scotland’s main train services suffered disruptions, with the majority of Glasgow, Inverness and Aberdeen connections closed. Arriva Buses also cancelled all of its Scottish services.

Youtube clips emerged showing bins and debris flying along Edinburgh’s historic streets and both the Tay and Forth Bridges were closed.