AN ATHLETICS coach is desperately seeking funds to fly a Gambian sprinter back to Scotland in time for the Commonwealth games.

Morro Bajo, 15, is set to become a star of Glasgow’s 2014 games but was excluded from school in December and returned to live with his father to Africa.

But determined to have him win a medal for Scotland , his former coach Bill Walker is now trying to raise enough money to fly him back from Gambia . 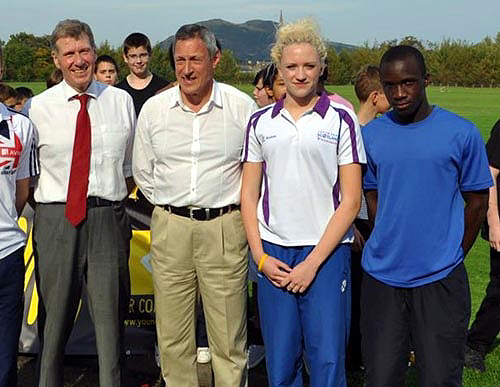 Morro was first noticed by one of Scotland ’s top coaches, Mr Walker, when he broke the Scottish 100m record for the under-16 group when he was 14.

The teen is said to have more “natural talent” than famous runner Allan Wells and is ranked fifth in Britain among under-16s.

But the teen, who lived in Portobello, Edinburgh, returned to Gambia last year after getting in to trouble at school.

Stepmother Becky Grangeret said: “I think he just needed to get away and calm down.”

But determined to bring Morro back to Scotland , his former coach Bill Walker contacted his mother to ask if he could return.

Family members in Gambia were reluctant to let him return, but when Mr Walker wrote to them with a direct appeal from Scottish Athletics, they have agreed to allow him to fly.

But Mr Walker is now facing a hefty £500 airline bill and is trying to raise funds to have Morro returned.

He plans to donate £100 from a £1000 award he recently received and is looking to raise the remainder from donations.

H said: “His family are happy for him to come back here but Gambian airlines won’t let him fly alone, so his aunt will have to fly out and accompany him.”

The athletics coach, who led Allan Wells to an Olympic gold medal in 1980, said he was stunned when he first met the youngster at Meadowbank.

He said: “Someone at the school phoned me up and said ‘I’ve got his boy, I think he could do well with athletics.’

“He came down and I thought ‘this boy is really talented.’

“He broke the Scottish record for uner-16’s 100 metres when he was 14. There was so much potential.

“He’s full of bravado too. He put on Usain Bolt’s website ‘One day I’m going to beat you.’”

Morro represented Scotland in the Celtic Games in Ireland last year and could take part in the East District championships in Edinburgh this May if he can return in time.

Mr Walker then hopes he will go on to win a place at the Commonwealth Games in 2014.

He said: “There’s so much more to come. He’s one of the most talented athletes I’ve seen.”

Nigel Holl, chief executive of Scottish Athletics, who wrote to the famiy said: “There’s no doubt that Morro has fantastic potential as an athlete – potential that could see him compete at international level in the future.

“To develop that talent he needs to benefit from expert coaching and be in a position to make a level of commitment to the sport.

“We’d love to see him back in Edinburgh soon and it would be ideal if he was able to compete in the East District championship on May 12 and 13.”

Ms Grangeret said her stepson has been asked to run for Gambia but would prefer to run for Scotland .

“I think he’s got so much talent in athletics. He’s running in The Gambia in competition there and he’s been asked to join the national running team, but he wants to run for UK and Scotland .”

Mr Walker added: “I’ve had experience of how athletics can help kids because of self-discipline you require. When they perform, they see their potential and think ‘If I can achieve that, I can achieve more.’”