Scots shoppers buy more fruit and veg than any other Brits

Scots Shoppers are buying more fresh produce than any other shoppers in Britain, a survey has revealed.

The research shows that shoppers north of the border are more likely to cook from scratch at home than shoppers in Wales or England. 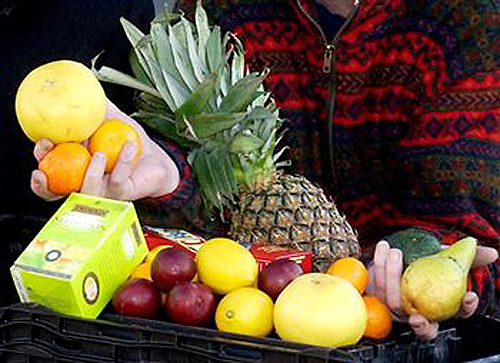 They are also more likely to buy fresh fruit and vegetables and choose food because it is healthy, than their southern counterparts.

The average Scottish family spend £6.40 more on vegetables per year than any other families in Britain.

And weight conscious Scots are saying that health is their primary reason for choosing to eat at home, with 19% admitting this, up on 17% in 2008.

Mark Thomson, business unit director at Kantar Worldpanel, who conducted the survey, said:  “Scotlandis different to the rest of Britain. People tend to associate it with haggis and deep-fried food, but it is far more complex than that.”

And more Scots families are cooking from scratch, which is leading to a healthier lifestyle, the study says.

The study showed that 44% of the soup consumed by Scots is homemade, compared with just 22% forEngland and Wales.

Mr Thomson added: “Eating in-home now accounts for just under one in five meal occasions inScotland, with health being the primary reason for this.

“In the rest of Britain, the number of meals eaten at home has remained pretty flat,” he said.

As well as stocking up on more fruit and veg, Scots shoppers are also buying more fresh red meat.

Over 89% of Scottish people buy fresh beef, while the figure south of the border is just under 84%.

The study showed that recipes made with red meat are more likely to be homemade inScotland than they are inEngland and Wales.

Mr Thomson said this is as a result of the strong branding that Scotch beef, pork and lamb has, and that the brands have become well-known elsewhere in Britain.

Scots are also happier to buy organic produce rather than super-market brands, according to the study.

But it is not all good news for health fiends as the study revealed that Scots shoppers also spend a greater percentage on soft drinks, alcohol and biscuits than those in England and Wales.

Laura Stewart, head of Soil Association Scotland, said: “It is encouraging to see in this research that consumers in Scotland are moving in the right direction and choosing more fruit and veg.

But she added that “obesity figures are rising north of the border and there is still a health gap, especially in the more deprived areas.”