A SCOTS pensioner was left without heating and hot water for two days after a local council decided she was too young for an emergency call out.

70-year-old Margaret Reid, who suffers from arthritis and osteoporosis, was told by Fife Council she would have to be 77 before she was entitled to a home visit within four hours from council workers.

Mrs Reid was left “freezing” and developed a cold over the two days at her home in Kelty, Fife. 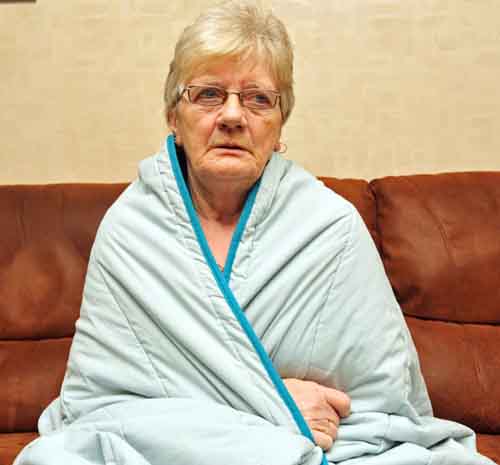 Mrs Reid was left freezing after Fife Council failed to respond to her pleas.

Mrs Reid said: “My grandaughter called the council’s emergency number and they told her they couldn’t help as I was under 77. It was a really freezing weekend and I ended up getting a terrible cold.

“I suffer from arthritis which seems to have become a lot worse since this happened. I’m so angry with Fife Council, I think they are a complete waste of space, they just never seem in a hurry to do anything.”

The grandmother-of-five was left without heating on Sunday March 4 and
it wasn’t repaired until Tuesday morning.

Margaret worked in the Kinross Mill and then as a cleaner before retiring.

Grandaughter Michelle Jones, (32), said: “She pays for her rent out of her own pension and paid taxes her whole working life and then this happens. It’s disgusting. when someone tells you over the phone your granny is considered too young to get her heating fixed it makes you sick.

“She was looking after my two year old and one year old on the Monday and they were cold too, they both got colds after staying at the house.”

The 43-year-old said: “I came home on the Sunday and the house was freezing, I couldn’t beleive what the council had said. It made me worry about my mum, the whole situation is ridiculous.”

Margaret added: “It was absolutely freezing on the Sunday night. There’s night gas fire or electric fire to put on when the heating breaks down. Its ridiculous to have rules like this. You’re a pensioners when you’re 60 or 65, we were sitting watching telly with coats on top of our clothes.”

He said: “This lady is a loyal council tenant of 70 years of age who has illness that is not helped by the cold.

“I think that no matter who it was they should have a response from the housing service but for a lady of 70-year-old to be left with no heating and no-one come near in this cold weather I find completely unacceptable.”

After the heating was repaired, Fife Council housing senior manager, said: “We are very sorry that Mrs Reid has been left in any discomfort, this should not have happened and one of our engineers fixed her heating on Tuesday morning.

“If someone is left without any heating at all, our engineers should be on site within 24 hours and its also standard practice to offer a loan of electric fan heaters, which the council would pay for.

“We’re investigating why this didn’t happen and we will either provide staff with more training or alter our procedures so that this doesn’t happen again.”