A PICTURE of Snow Patrol members swimming with a dolphin in Dubai has prompted a furious backlash from animal lovers across the world.

Scots guitarist Paul Wilson and lead singer Gary Lightbody were photographed with the “resident” dolphin at the  five-star, £350-a-night  Atlantis The Palm resort in the city.

But the PR stunt backfired after animal rights campaigners took to the internet to condemn the band for appearing to support keeping dolphins in captivity. 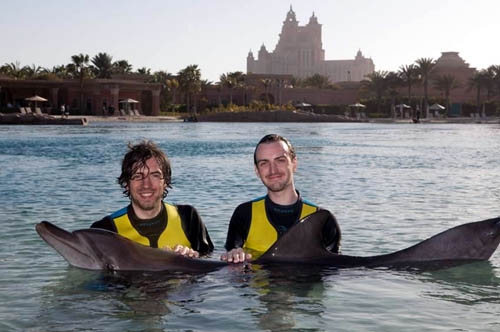 The band, who formed in Dundee and have sold millions of records, were in Dubai to headline the city’s Sandance festival.

When the dolphin picture appeared, showing Wilson and Lightbody enjoying a “dolphin encounter”, it sparked a huge row.

One angry blogger, Danielle Marie, wrote: “So Snow Patrol, you endorse cutting off 90% of a dolphin’s life so people can swim with it in an aquarium while the animals dies after a short life from a performing marine version of a concentration camp.

She continued: “Cruel. How dare you? I demand you show humanity now if you possess it by stopping your support for these disgusting marine concentration camp equivalents.”

Another angry blogger, Thomas Reub from Germany, said: “What a pity, that movie stars who had shootings with animals, don’t know about the suffering those captured/captivity-bred dolphins encounter. Dolphins belong in their natural habitat, which can only be the ocean!”

The anger went as far as South Africa with one blogger taking to the net to voice her opinion on the photo-op.

She said: “Snow Patrol- dolphins in captivity are so not cool. They deserve their freedom as much as you – the right to live their full lives where they belong, in the ocean.”

Angry Tweets also started to pour in once the pictures were posted online yesterday.

One Tweeter in South Africa said: “If you’re a fan of Snow Patrol, please let them know that supporting the captive dolphin trade is not cool.”

The photo-op is a favourite with celebrities who visit the luxury resort, attracting the likes of The Only Way Is Essex star Mark Wright as well as Kelly Brook, UB40 star Ali Campbell and Colleen Rooney.

The resort offers the opportunity to swim with their resident dolphin for £150 and promises to be an “unforgettable adventure.”

No one was available for comment from the band.