KILLER David Gilroy continued to host parties and rowdy social events at his Edinburgh home, despite being charged with murder.

Gilroy, who was convicted of murdering bookkeeper Suzanne Pilley at Edinburgh’s High Court earlier today, threw a Halloween party for his teenage children last October, it has been revealed.

He also had guests round to celebrate and watch rugby games and threw several other parties throughout the year. 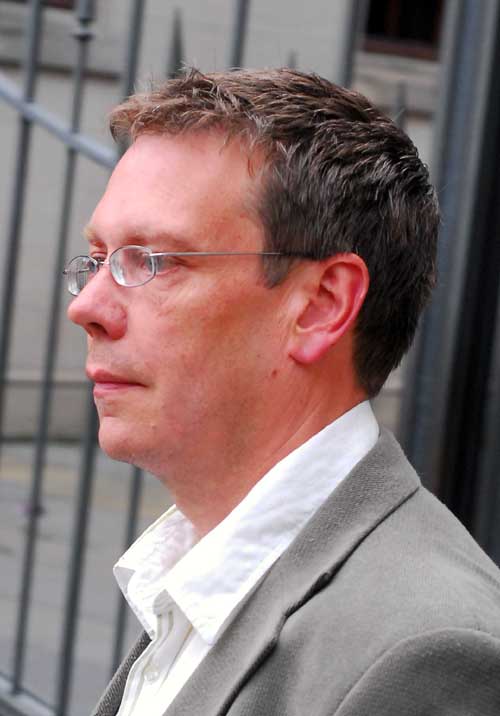 After two days of jury deliberations, Gilroy, from Silverknowes in Edinburgh, was convicted of killing Ms Pilley in 2010.

Neighbours, who live in the same street as the Gilroy family, revealed earlier today that they felt intimidated by Mr Gilroy, and were shocked by his behaviour, with a murder trial ongoing.

One male neighbour, who wished not to be named, said: “It’s incredible that he was allowed to walk around the street while all this was going on and it’s a complete relief that he’s been found guilty.

“He used to walk around Silverknowes like he was an action man, I found him to be very aggressive and whenever I came to face-to-face with him he would stare me out.

“I found him to be very confrontational and intimidating. He had a bad attitude.

“We are a really close-knit community and this has been hard on the area, we are glad it is all over.”

The neighbour said the Gilroy’s continued to throw social events and parties throughout the year.

He said: “The family have acted like nothing has been happening. They have been throwing parties and they even threw a huge Halloween party for the kids last year, it seemed like there was about 100 kids there, which is crazy – why would you let your children go to a party at the house of a murderer?.”

Another female neighbour added: “He is an angry man and I felt very scared living in the same street. I locked the door shut every night. I would describe him as an intimidating man. I feel so sorry for the children.

“I hope the Piley family are able to find the body now, I just feel so sorry for them.”

The neighbour revealed that Mr Gilroy regularly gambled at a betting shop in Davidsons Mains and that he was known to place £100 bets. She also claimed Gilroy used to help out at a local boys football club.

She said: “He is a big rugby fan and would hang the family would have people round and hang Welsh flags from the windows whenever Wales was playing a game.”

The neighbour said she was shocked that Andrea Gilroy had chosen to support her husband, despite his conviction.

She said: “What on earth is she thinking? I can’t believe she is standing by him, that’s really shocking. It’s her children I feel most sorry for, I can’t understand why she would do this.”