WINDOWS at a brand new £170m hospital have been locked shut to stop patients and staff falling out.

The new wing of the Victoria Hospital in Kirkcaldy, Fife, only opened in December but a potential safety fault has been identified with its windows.

The NHS board that runs the hospital has attracted almost 100 formal complaints since the new wing opened. In one case, a woman gave birth on the pavement outside the hospital after midwives took several minutes to respond to the door buzzer. 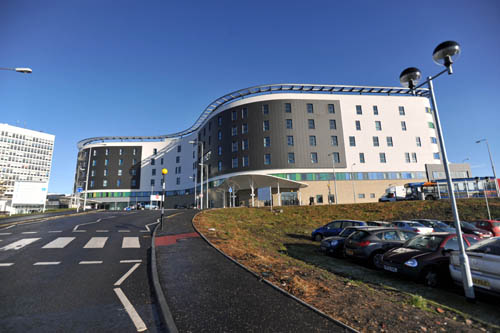 The £170m hospital wing only opened in January this year

One recent patient told today how she wanted fresh air in her ward only to discover it was physically impossible to open the windows.

Linda Gatiens, 64, said: “I stayed for ten days was in Ward 22, on the second floor, and asked a nurse one day how the windows opened.

“She told me that they couldn’t open as the handles hadn’t arrived for them.

“This meant that if there was a fire in the ward and the exit door was compromised, patients would be trapped in the room, like dirty laundry.”

A spokeswoman for NHS Fife said admitted that “issues” had been identified with windows that meant “in extreme circumstances the safety device could be overcome”.

“As a precautionary measure all windows will remain locked shut in the new wing until NHS Fife is fully satisfied that the issue has been resolved.

“The closure of any windows in no way affects the very robust fire safety measures integrated into the design and operation of the building, nor does it affect the comfort conditions for patients in ward areas.”

The spokeswoman added that contractors had been asked to “look into rectifying this as a matter of urgency”.

Last month a 25-year old woman was forced to give birth on the frozen pavement outside the hospital after what she claimed was a six-minute wait for staff to answer the door.

The family of a one-legged heart surgery patient have issued a formal complaint, after the OAP was abandoned in a toilet by staff at the same hospital.

This week a senior Fife councillor called for health secretary Nicola Sturgeon to investigate the situation at the hospital after NHS confirmed it received 94 formal complaints in January and February alone.
Victoria.

Labour group leader, Alex Rowley, said: “I definitely believe that Nicola Sturgeon should send a team over to Fife to find out what’s going on and address the issue of capacity. There are far too many people coming forward with really bad experiences.

“What are the figures for nursing staff now compared to a year ago? I’ve been told the capacity has been reduced by 100 beds from a year ago so I want to know if that is the case.