COASTGUARD tugs which save stricken vessels in Scottish waters are to be axed after funding for the service ran out.

The potentially life-saving vessels work around the northern isles and Hebrides rescuing boats which have run aground.

News of the cut came just as it emerged a cargo ship had run aground in North Uist and was limping to safety in Stornoway under escort from the RNLI. 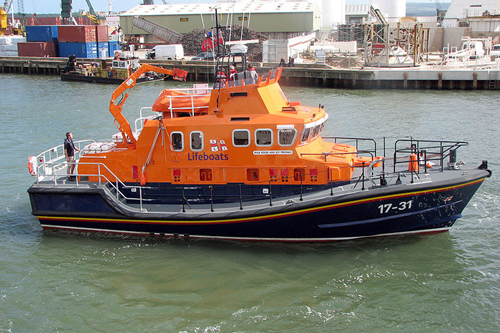 With the axing of the Coastguard tugs, the RNLI came to the aid of a stranded vessel on Monday

The UK government ended the contract for the saviour ships last year but granted a three month stay of execution following fierce criticism of the move.

Interim funding was found but was only able to pay for another three months of work.

The Western Isles tug has already been withdrawn and it is expected one based in Shetland will be withdrawn soon.

The service was introduced following the 1993 Braer tanker disaster which saw 85,000 of crude oil pour into the seas around Shetland after an oil tanker ran aground.

The Scotland Office said today that a replacement service was being sought and negotiations were ongoing.

Western Isles  SNP MP Angus MacNeil said: “I was shocked to learn that the tug left the Hebrides over the weekend. The UK Government has now left the Hebrides without any emergency tug cover for the foreseeable future as no new arrangements have been announced.

“How can this be an example of good governance?

“I am calling for the Scotland Office to explain their comprehensive, long-term plan for maritime safety in our Scottish waters.

”For as long as this responsibility is in their hands they must have a plan for safety.”

On Monday night the 367ft cargo ship MV Flinterspirit ran aground on Flodday Mor Island as it travelled from Sweden to Belfast.

An RNLI lifeboat from Barra was launched as a precaution but the 4,500 tonne boat managed to refloat itself and was escorted to Stornoway where it is now at anchor awaiting inspection.

Campaigners said such incidents highlight the need to have a tug boat permanently stationed in the area.

In December it was announced that the off-shore oil industry had offered to send their chartered vessels to help deal with oil spills and other maritime emergencies.