A CAMPER who almost killed by a leaking stove in his tent has woken from a coma and is making a good recovery.

Hiker Phil Morgan was found by mountain rescue teams earlier this month near Minch Moor in the Scottish Borders, who were only able to locate him by his ringing mobile phone.

It is thought gas from his camping stove leaked into the 49-year-old’s tent, leaving him unconscious with suspected carbon monoxide poisoning.

Mr Morgan, from Stow, near Galashiels, had hypothermia when mountain rescue teams found him after on 1 March after 24 hours searching.

He has been recovering in Borders General Hospital, amid fears trhe gas may have caused brain damage.

Today (tue), it was reported he had shown great improvement and hopes to return home in the next few days.

The alarm was first raised by Mr Morgan’s girlfriend Trudy Anderson on 29 February, who became concerned after he did not answer his phone.

Ms Anderson said earlier: “He was located roughly halfway along the route he had mapped for himself.

“It was the ringing of his mobile phone that helped mountain rescue to locate his exact position in the tent in the dark.”

Trudy also said on Facebook: “He did not make an outdoor fire as the wind had picked up. He used his Camping Gaz light and a small stove in the tent instead.

“It was something Phil had always done. His decision to use the light and stove in this tent on this trip appears to have been an error of judgment.”

Mr Morgan briefly regained consciousness on 4 March, prompting Ms Anderson to say he was on the ‘road to recovery.’

But on 7 March Ms Anderson asked friends to record stories for Mr Morgan, in the hope he would respond to familiar voices. 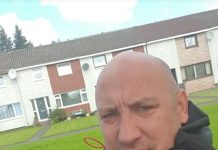