A penguin parade with a difference will take place tomorrow as 29 Gentoo penguins move to a new home within Edinburgh Zoo.

The birds will be carried by a team of animal keepers from the normal penguin enclosure to their new home for the next few months.

One bird per keeper, the unusual 15 minute parade will wind up at Barbary Rock, the old rock hyrax enclosure, which has been converted into a temporary home for the zoo’s remaining Gentoos. 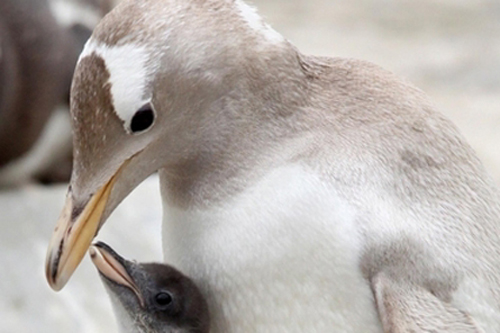 A Gentoo mother and her chick at Edinburgh Zoo

Edinburgh Zoo’s penguin enclosure is currently the focus of an intensive maintenance and upgrade programme which will take a couple of months.

Essential maintenance work is also being carried out on the penguin pool.

The necessary work means that Edinburgh Zoo’s penguin colony of Kings, Rockhoppers and Gentoos have been split up for a short time.

A third of the penguin colony remains atEdinburghand the remaining birds have been temporarily re-homed in other experienced zoos.

“Although it will be an extraordinary site to see 29 keepers walking through Edinburgh Zoo each with a Gentoo penguin tucked under their arm, it’s actually the quickest and kindest way to carry out the move.

Transferring the penguins in this way means the birds will be handled only once and that the move will be carried out in a matter of minutes. 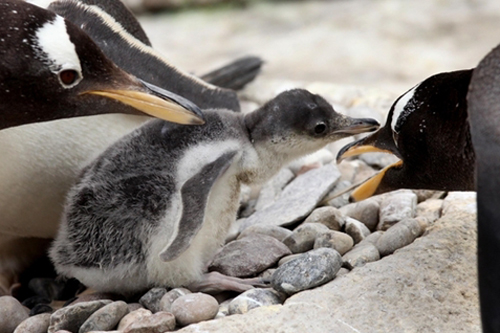 Gentoo penguins will take part in the parade

“Barbary Rock even has the addition of a new pool, recently created for our Gentoo birds, so we’re sure our penguins will be happy in their new home.  And, as Gentoo breeding season is almost here, pebbles and nest rings will be added to the new enclosure next week after the penguins have had time to settle in.

“We don’t know if they will breed, but many of the birds are starting to show typical breeding behaviour, and we have purposely kept established pairs of penguins together.”

Visitors are invited to see Hugh Roberts, Chief Executive, and Iain Valentine, Head of Conservation and Research, lead the p-p-pick up a penguin parade tomorrow – Wednesday 21st March – at 10.30am.