Dragons Den star Duncan Bannatyne has branded people who smoke “stupid” and slammed them for having no self respect.

What started as a debate on new tax measures on cigarettes in the UK, soon descended into a Twitter row between the 62-year-old and some of his followers.

The Scots star started the argument earlier today when he tweeted to his half a million followers: “Yes! 37p on a packet of cigs!.” 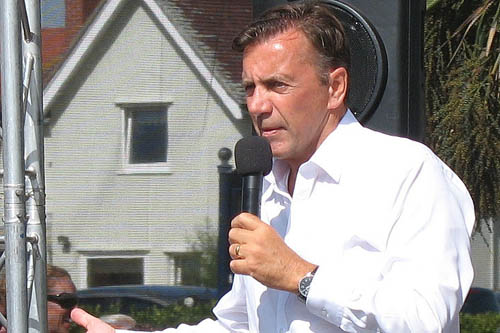 Mr Bannatyne is not shy of a Twitter row.

One follower, @April1990, was offended by his comment, and tweeted the self-made millionaire and non-smoker: “Another thing just to make the poor even poorer Duncan.” To which he replied: “Not if they stop.”

The twitter user then defended smokers, stating: “I know but its not that simple is it? Its an addiction and an expensive one at that.

To which he replied: “Rubbish, anyone with an ounce of self respect can stop.”

@April1990 then said: “That’s absolute rubbish! What has it got to do with self respect? Are you a smoker Duncan?

She added: “obviously the increase in price won’t affect you with you rolling in money.” To which he replied:  “It will not affect me because I am not stupid enough to smoke.”

Another user @welshybhoy901, seemed to be confused by Mr Bannatyne’s tweet, asking: “why you moaning about it its the only tax I agree with as smoking should just be banned altogether.”

To which, the star replied: “You are daft, I never moaned about it I applauded it.”

Mr Bannayne is not shy of a Twitter row, causing outrage last year after offering his Twitter fans a cash reward for breaking the arms of a twitter follower who had sent his daughter an abusive message. He said: “I offer £25,000 reward for the capture of the coward who calls himself @YuriVasilyev. Double if his arms are broken first’.

Earlier this month, the dyslexic hit out at “bullies” who pulled him up over his spelling on Twitter.