MODERN Glasgow Prestwick was transformed into Ancient Greece to celebrate the start of the airport’s biggest-ever summer flights programme on Sunday (March 25).

Togas replaced trousers as Greek “god” Paul Rintoul, from Saltcoats, and “goddess” Amy Lucas, from Darvel, both airport employees, celebrated the start of Ryanair’s low-cost flights to Corfu and Crete, two of four new routes from the airport this summer. 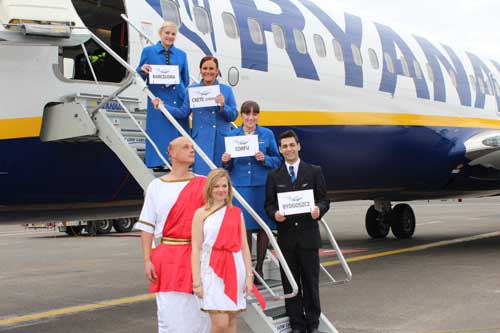 Both are “firsts” for Prestwick. Crete, Europe’s most southerly island, is bathed in clear sunlight much of the year. It really has everything – long sandy beaches, watersports, quaint mountain villages and great nightlife. In April and May temperatures will be in the low twenties, just perfect for a relaxing pre-summer break. And in April you can get there for just £15.99 one-way including tax – amazing value!

Another new Prestwick route is to Corfu, the best known of all the Greek islands. If the summer heat and crowds put you off, then go for the quieter periods such as April and May. The days are warm and the evenings cool, and you’re guaranteed spectacular holidays with quiet, deserted beaches.

The third new route is to Barcelona which offers the best of both worlds – a stunning city and gateway to the fantastic Costa Brava. And Barcelona is a city with a beach – four to be precise – so it really does provide the perfect mix for a cultural city and beach holiday.

And the fourth new summer route is to Bydgoszcz in Poland. Pronounced “Bidgost”, it’s a charming old town on the banks of the Brda and the Vistula rivers. Museums are housed in beautiful architecture and scattered throughout the city but, above all else, Bydgoszcz is music, thanks to its many music festivals.

Chief Commercial Officer Graeme Sweenie said: “For gods, goddesses and even mere mortals, Glasgow Prestwick is your perfect gateway to the sun this summer. Quieter, more convenient, with less hassle and fewer queues than Glasgow’s other airport, easy-going Glasgow Prestwick has twenty-seven budget routes to nine countries, with the majority concentrating on popular, traditional Mediterranean hotspots that Scots love.”