TWO Royal Mail postmen are starting an epic journey this morning from Edinburgh Castle as they plan to cycle 592 miles in six days on a tandem bicycle.

Garreth Ellidge and James Capstick aim to raise over £4,000 for the Make-A-Wish Foundation UK. Their ambitious cycle ride will involve visiting each of the UK’s capital cities (Edinburgh, London, Belfast, Dublin and Cardiff) and the Irish capital, Dublin.  A third postman, Andy Brown, will accompany them as driver of their back-up vehicle.

With friends David Harries and Peter Baker, the team of four will start their journey on Sunday, 25 March at Edinburgh Caste and end on Saturday, 30 March at London’s Olympic Stadium. 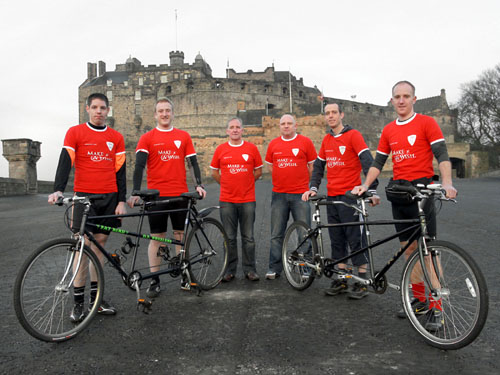 The ambitious route which will see them cycle from Edinburgh to Turnberry, Belfast to Dundalk; Dundalk to Dublin; Liverpool to Ludlow; Ludlow to Cardiff and Newport; and  Newport to Oxford before a triumphant arrival at London.

Paul H Shaw, Royal Mail Manager said: “Garreth, James and Andy have already done a great deal of work for various charities. They were recently commended for their efforts by Royal Mail as part of the company’s Chairman’s Awards and so we’re wishing all the very best with their latest challenge.

Garreth said: “We would like to thank Royal Mail for all the support and encouragement we have received as we have prepared for this ride. There’s no doubt we’ll be stiff and sore by the time we reach the Olympic Stadium in London but we are honoured to be helping such a great cause. 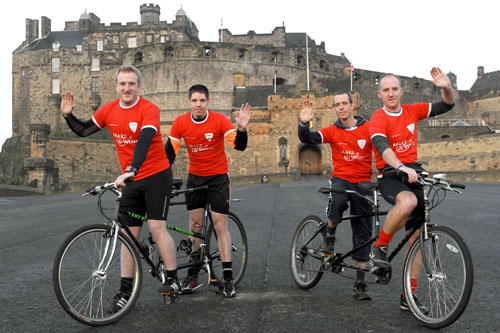 The quartet will finish their journey at London’s Olympic Stadium

“We’ve already arranged a few fundraising events including a successful quiz night. We wish to thank all our supporters and are looking forward to meeting more friends and colleagues on the road.”

Andy Holland, Challenge and Events Manager at Make-A-Wish Foundation UK: “We are thrilled that Garreth, Peter, David, James have chosen to cycle round the country for us and wish them all the best for Sunday. Make-A-Wish hopes to be granting 1,000 magical wishes this year; a target we couldn’t reach without the help of dedicated supporters like the Royal Mail cycle team.”

Anyone wishing to support the team can make a donation through: http://www.justgiving.com/4blokes-2bikes-makeawish