QUEEN guitarist Brian May has given his blessing to a new version of Bohemian Rhapsody – sung by a Donald Trump puppet.

The video, which is set to take YouTube by storm, was made by campaigners who wanted to express their anger at Trump’s controversial golf resort development on the Aberdeenshire coast.

The Trump puppet, filmed against a background of unspoiled coastal scenery, sings a hilarious parody of the Queen hit, boasting: “I’m just a rich kid, I’m no nonentity.” 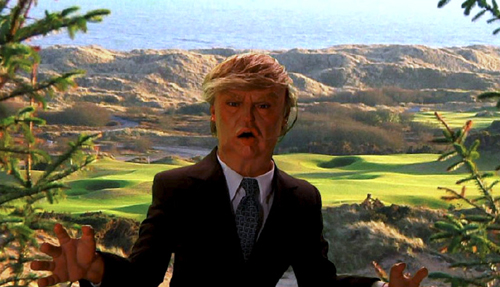 The Donald Trump puppet, seen above, features in the seven-minute video

May, who gave permission for the song to be used within four hours of being asked, said he wanted to show his “disgust” at Trump’s plans for the Menie estate.

The musician told the campaigners: “I will do what I can to bring it a little more out in the open. I’m happy to secure you permission to try this yourself.”

The seven-minute song went live on the popular video site on Sunday and has already received more than 650 hits based on word of mouth alone.

A leathery-looking latex Trump sings: “This is the real thing, living the fantasy, started a landslide, no escaping our destiny. Open your eyes, look up and you’ll see me, I’m just a rich kid, I’m no nonentity.

The puppet continues the song, while images of the controversial golf course flicker behind him, as well as photos of campaigners protesting on the site. 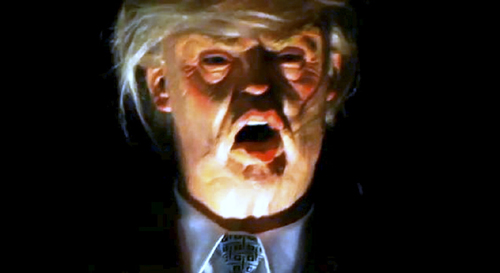 “Too late, you’ll never stop me now, I’ve bought up all the land, and the council were just grand, and my mama, that’s Mary MacLeod from the isle of Lewis, would be proud of me, after all she was as Scottish as can be.”

The seven-minute-long video took it’s creators 18 months to complete, from start to finish.

“Local hero” Michael Forbes and his family also feature in the video.

Mr Forbes, who lives on the Menie estate, openly criticised Trump’s plans to build the course and refused to sell him part of his land to make way for the multimillion pound project.

Mr Forbes’ mother Molly, 86, also launched a legal battle against the tycoon, but was forced give up after she was refused legal aid. 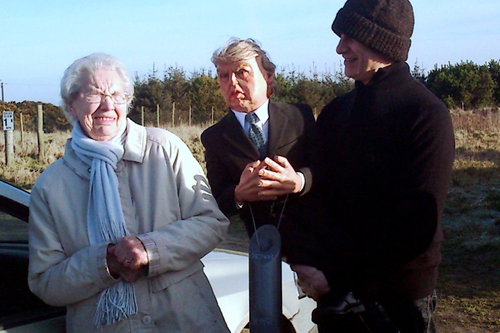 She is now being pursued by Trump for legal expenses, which are claimed to have cost him £50,000.

In a witty parody of the famous “operatic” section of the original, the Trump puppet sings: “I know a grubby little peasant of a man – Michael Forbes, Michael Forbes, says I’m stuck in a bunker.

“I’ve spent almost my whole life working in business and I know how difficult planning and environmental laws can be.

“We have hundreds of golf courses in Scotland, and we don’t need another one – especially if it means that people will lose their homes.

Ms Cameron said she “it was perfect” for the video. 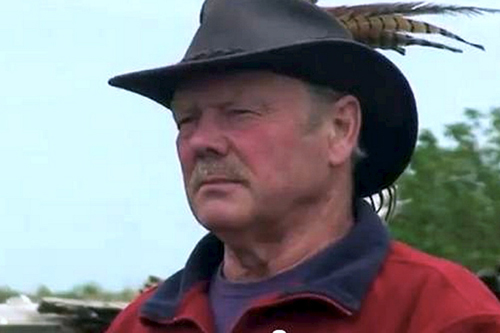 Michael Forbes, above, was deemed a “local hero” for his battle against Mr Trump

She sent him an email asking if she could have his permission to use the song and was shocked when she got a reply within four hours.

Mr May agreed to let her use the world-famous melody and said he backed the project whole heartedly: “”I sincerely hope you will be able to stop this nasty project in its tracks.

“I cannot see how it can be legal for an individual to compulsorily purchase a piece of private property just because it’s inconvenient to his plans.”

Ms Cameron and her partner Dmytro Morykit approached several puppetry companies to create the model, and were turned away from Scottish companies.

One London company agreed to make the doll for £1000, but refused to reveal their identity.

Ms Cameron then asked Spitting Image puppeteer Francis Wright and film-maker John Pullman to help with the production and it was finally filmed in just one day in a Leith film studio.

She added: “It was a very interesting project and we just hope it does well. We want people to know that it’s not too late to speak up about Mr Trump’s latest project.”