A GOLFER has told how his life was saved by friends singing the Bee Gees classic Staying Alive.

Alan Linton collapsed from a heart attack as he enjoyed a round of golf in Fife.

The 39-year-old owes his life to the fact his friends remembered a TV advert, starring Vinnie Jones, which told people to give chest compressions in time to the 70s disco classic. 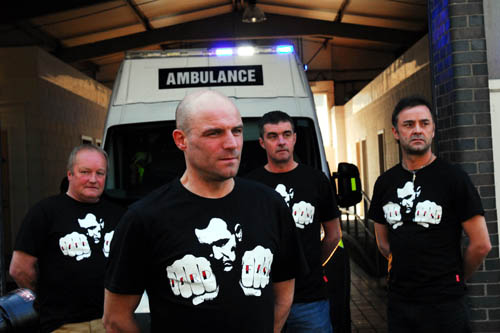 Today, Alan also met and thanked the paramedics and the 999 call handler who also helped save him from an early grave.

In a recording of the 999 call [contains strong language] from Charleston Golf Course, near Colinsburgh, one of Alan’s friends, Paul Pinkney, can be heard shouting: “I’m doing the staying alive thing.”

Alan, who collapsed on February 5, said: “I feel very lucky and overwhelmed that the song saved my life

“The song is the reason I’m alive because they used that beat so it’s a major contribution to why I’m here.”

He added: “I do like the Bee Gees but it was a bit funny, after I got home, my wee girl started singing that song. I’ve no idea why, it must have been on the telly, and it brought it all home to me that that was the song that probably saved my life.”

Alan had gone out golfing as part of a four-ball will friends Brian Henderson, Michael Rennie and Paul.

He suddenly took ill on the sixth green. “I was walking back to my golf bag and I was feeling a bit dizzy and I got to my bag and went down onto my hunkers and I saw bubbles.

Michael said: “When he actually fell over we thought he was messing about because of the way he went down. And Brian went over to give him a kick to get up and that’s when we realised it was a lot more serous.”

The group then leapt into action, with Brian phoning an ambulance and Paul starting CPR using advice from the advert.

Paul said: “The ad had been on the week before; it had been on a couple of times. If it hadn’t have been for Vinnie Jones you’d have looked at it and gone ‘Yeah, whatever’ but because he was doing it it just sticks in your head.

“It came straight to us. I was playing the whole thing in my head. We sang it out loud for a bit. It obviously works.”

Paul added: “It’s amazing that he’s alive. You read about things happening and you never think it would happen to you and it does happen. It took us days to get over it, weeks. And listening to that tape I had tears in my eyes.”

Alan was airlifted to Ninewells Hospital in Dundee where he remained for three weeks.

Today he thanked his friends, paramedics and call handler for saving his life.

He said: “I’m overwhelmed. It was total teamwork rather than just my friends; it was people I didn’t even know. I’ll be indebted to them for a long time.

“It was a total shock, it was very emotional. I still can’t believe it happened to me. I feel great now. I listen back to the tape [of the 999 call] and it just feels like somebody else that it happened to.

“I’d like to meet Vinnie Jones and shake his hand; it would be a nice thing to happen.”

“We had to keep reassuring them to keep going,” she said.

“I had to say to them the ambulance won’t be long and that a helicopter was coming.”

Alan McIntyre was one of the paramedics who raced to the scene. He said: “We know from evidence that the quicker you do something the better the outcome. Vinnie Jones on one prime time advert got the message across to these guys about the benefit of quick actions.

“The sterling work that these guys did made our jobs all the more worthwhile.

“The guys were all rallying round. The hairs on the back of my neck were standing up and it was quite an emotional event.