ATTEMPTS to impose an alcohol ban on Madonna’s concert in Scotland this year have been thwarted by bungling officials.

Residents in Edinburgh’s upmarket Murrayfield area want to stop 70,000 fans being able to drink during the gig this summer.

But the local council wrongly informed the campaigners that they were not allowed to object. 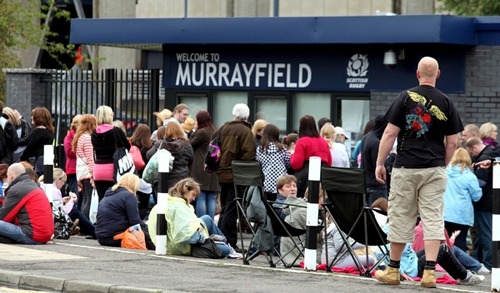 Fans queue for a concert in Murrayfield

And when they finally admitted their mistake, Edinburgh Council then refused to consider the objection – because it was too late.

The Queen of Pop announced her first ever Scottish show  as part of her world tour taking place this summer.

Fans have already complained that ticket prices for the July 21 concert at Murrayfield Stadium are too high, with some seats going for £160.

Antisocial behaviour and violence has been an issue in the past with concerts held at the stadium and some residents are dreading the show.

Murrayfield councillor Jeremy Balfour tried to get the licensing board to consider a late objection but was voted down.

He said: “Local residents have been put into an unfair position and the board should take into consideration the objections.

“The impression was put across that everything was fine when there are significant concerns about the level alcohol taken before and after theses events.”

Dr Hamish Ross, chair of the Murrayfield Community Council, said that concerns should have been acknowledged.

He said: “It’s obviously frustrating that residents have been told something incorrect, that they can’t be involved in the process where they can.”

He said his concerns lie with people drinking on the streets, rather than the license held by Murrayfield to sell alcohol.

Last June, revellers were accused of antisocial behaviour after being sold alcohol throughout the day at a Kings of Leon concert.

Fans also caused havoc at the Oasis gig in 2009 before the band even took to the stage.

Nick Fraser depute clerk of the licensing board told councillors they could consider late objections.

He said the official who made the mistake normally dealt with public entertainment rather than alcohol.

“That officer wasn’t aware of the relevant procedures,” he said.