SMOKE from a massive hillside blaze which destroyed hundreds of acres of moorland was photographed from space.

A NASA satellite captured the inferno near Dumfries as it passed over Britain on Tuesday.

The plume of smoke from the blaze on Drumburn Hill was closest Scotland had to a cloud in the sky as temperatures again hit 22 degrees centigrade. 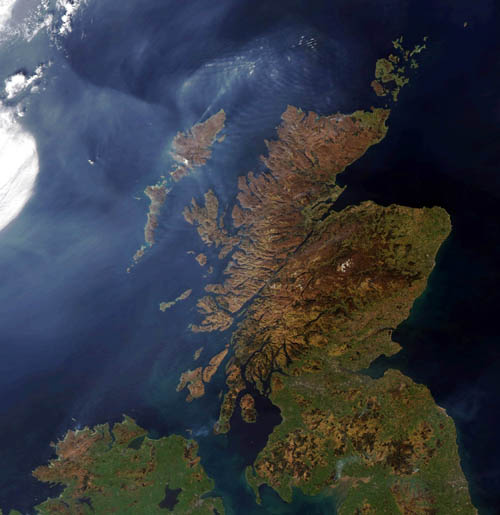 The fire near Dumfries can be seen at the bottom of the image  Photo:Met Office/NASA

The image was received at the Met Office satellite reception facility in Exeter at 12:32pm.

The satellite was tracked across the sky by one of their dishes as it passed overhead.

The AQUA satellite is at an altitude of 705km (438 miles) above the Earth. 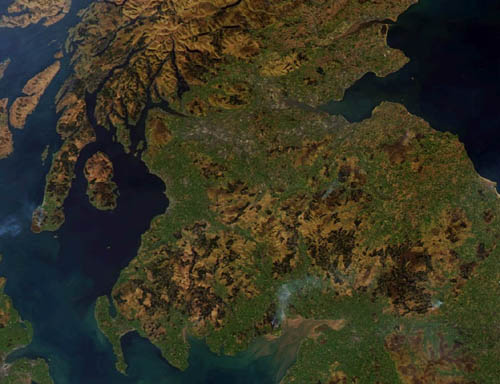 It was captured by a satellite 440 miles above the Earth  Photo:Met Office/NASA

Fire services have warned the public about wildfires during the current hot, dry spell.

Station Manager Mike Cordiner,  Community Engagement Manager for Grampian Fire and Rescue Service, said: “The exceptional dry weather that we are experiencing has drastically pushed up the risk of grass, forest and hill fires.

“Fires of this nature are not only damaging to the natural environment, they cause a considerable drain on Fire Service resources as well as putting firefighters lives at risk.

“Our biggest concern lately has been the reckless and irresponsible fire raising that has occurred at various locations throughout Aberdeen.  The areas of Hazlehead, Bucksburn and Heathryfold have been particularly hard hit.

“In Aberdeenshire a mixture of wilful ignition and careless controlled burning has particularly added to the workload of our Fraserburgh and Peterhead crews.

“In the Moray area, Elgin, Keith and Forres have all experienced grass fires caused by carelessness or deliberate ignition, resulting in fires of varying magnitude.

“We are working very hard with partner agencies to address the problems in these areas, including school talks, increased Police presence and targeted patrols by City Wardens in Aberdeen.

“The public are obviously going to take advantage of this unseasonal weather and get out into the countryside more than they normally would. Access to rural areas and remote beauty spots is more readily available but with these increased rights come the need for more care and responsibility.

“Cigarettes should be completely extinguished before disposal and camp fires and portable barbecues should not be considered in remote areas where the ground and vegetation has become so easily ignited.

“With regards to the burning of cut or unwanted vegetation, some of the largest fires we attend are caused by tenants or landowners who are carrying out controlled burning but are either unprepared or get caught out by the rapid spread of fire during a dry spell.

“We would encourage landowners to refrain from controlled burning of vegetation during this heightened period unless they are fully aware of their responsibilities.”