EDINBURGH Castle is joining thousands of landmarks across the globe, including the Sydney Opera House, the Eiffel Tower and the Forth Bridge, to help raise awareness of climate change.

The castle is taking part in Earth Hour –a World Wildlife Fund initiative which invites individuals, businesses and organisations to show their support for people and nature around the world affected by climate change by switching off their lights for an hour.

On Saturday, March 31 the castle will be turning off its floodlights for an hour between 8.30pm and 9.30pm as part of the world wide event. 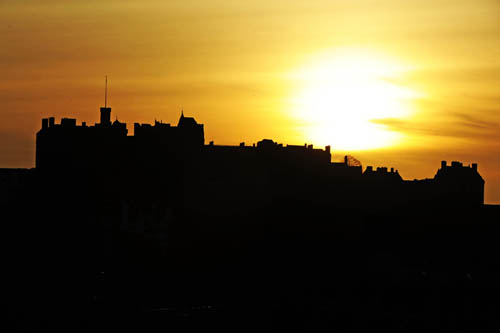 The castle will be plunged into darkness for an hour

Launched in 2007 in Australia, the initiative has grown to be a global phenomenon with hundreds of millions of people around the world participating. In 2011, more than 5,200 cities and towns in 135 countries worldwide took part.

The site is one of a number of Historic Scotland attractions across Scotland to take part in WWF’s Earth Hour. Other participating sites include Stirling Castle, Urquhart Castle and Linlithgow Palace.

Susan Loch, Head of Visitor Operations for Historic Scotland said: “Historic Scotland is committed to looking at ways to reduce our carbon emissions and we will shortly be launching our Carbon Action Plan.

“We are proud to support Earth Hour through switching off the lights at our properties on Saturday, March 31 and being part of this global statement on climate change.”

“This year promises to be better than ever and will send out a bold visual message that we all must take action to tackle climate change.

“The Council takes tackling climate change very seriously, recognising that small actions make big differences. I would encourage everyone to play their part and turn off lights to mark this global event.”