THE husband of a cancer-stricken pensioner has claimed he was threatened by a hospital parking attendant who told him he was a bouncer and wanted to “pull folk from their cars”.

Tom Robson, 60, said the incident happened as he collected his wife, Jane, from a hospital in Kirkcaldy, Fife.

Mr Robson said he was forced to stop in the drop off point at the Victoria Hospital because the car park was full. 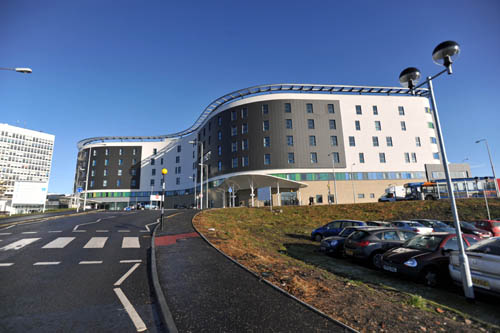 As his wife, who has stomach cancer, waited in a wheelchair inside the building, Mr Robson was confronted by a parking attendant.

He said: “He came across and said ‘You can’t park there’.

“I explained to him why I was there. He said: ‘We get this all the time, I’m watching on camera, I’ve got a job to do’.”

According to Mr Robson, the man added: “We get threatened all the time by the general public.

“In fact, I’m a bouncer and I feel like pulling folk from their cars when they get cheeky with me.”

Mr Robson said: “You shouldn’t tell people you are a bouncer. I was a prison officer for 26 years and I never spoke to anyone like that.”

He added: “I don’t need this stress. I’ve had a quadruple bypass 15 years ago. You’re not just turning up to park your car, they should realise why people are going to be there.”

Bill Gillespie, the head of estates for NHS Fife, said four wardens were employed to ensure the car park was kept safe for members of the public and that access for emergency vehicles was kept clear.

He said: “We received a verbal report to our security office of an incident similar in nature to that described. In order to determine the facts of the incident, the staff concerned will be interviewed.

“All investigations into staff behaviour, including those employed by an external contractor, are undertaken in confidence as it would be inappropriate to publicise personal information of this nature.

“It may be taken however, that the investigation into this and any other complaint, will be carried out with integrity and honesty, in line with NHS Fife procedures and will be fair and thorough.

“Any appropriate corrective action will be applied if found to be necessary.”

The brand new £170 million facility has come under fire repeatedly since it opened, with complaints including the treatment of patients, windows being locked shut and a lack of parking spaces.