THE Scottish SPCA is appealing for information after two guinea pigs were abandoned at a farm in Edinburgh.

A man was spotted dumping the two frightened males at Gorgie City Farm on Gorgie Road on Thursday afternoon before driving away.

The young guinea pigs are now being cared for at the charity’s Edinburgh and Lothians Animal Rescue and Rehoming Centre at Balerno, where they have been named Simon and Garfunkel. 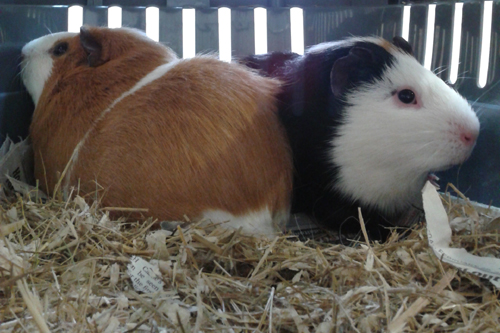 Simon and Garfunkel were abandoned at Gorgie city farm

Animal Rescue Officer Steph Grant said, “It seems the person who abandoned these guinea pigs left their carrier on the ground and then drove off.

“Simon and Garfunkel had severely overgrown claws when they were found which would have caused them a great deal of discomfort and made it difficult to walk.

“Despite their ordeal, they are really friendly boys who don’t mind being handled and it’s clear they’ve been someone’s pets until recently.

“Whoever left Simon and Garfunkel may have thought they were doing the right thing by taking them somewhere they would be found quickly, but there is still no excuse for abandoning an animal and it is an offence.

“Unfortunately, no one was able to provide us with descriptions of the male or his car so we’re appealing to the public in the hope that someone will recognise Simon and Garfunkel.”