THE iconic sight of St Andrews students wearing red undergraduate gowns in the medieval town has become an international symbol for the university.

But now postgraduate students will get the chance to join in with the tradition as a new dedicated gown has been introduced.

The black gowns have been created in the Cambridge MA style, the most frequently used in the UK, with the crest of St Leonards Postgraduate College. 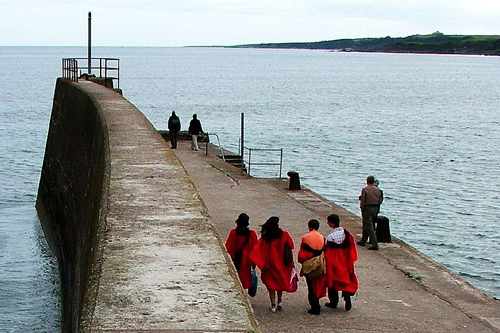 Undergraduates in the town traditionally wear a red robe  Photo:Seewah

Ten have been created and are available for hire at the Student Association shop for special events.

Previously postgraduate students would wear the gown and hood of their highest degree during special occasions.

They were not entitled to wear the red gown as the college does not have any undergraduates enrolled.

However, with a large international cohort enrolled in the University’s increasingly expanding postgraduate college, many didn’t graduate in a gown or have access to it in the UK.

It is hoped the new scheme will allow postgraduate students to feel a part of the special gown tradition at St Andrews.

Holly Patrick, Postgraduate President, said: “We are extremely encouraged by the opportunity to re-ignite a gown tradition for postgraduates at St Andrews.

“Fostering collegiality at the postgraduate level must be a key priority for St Leonards College as the university moves into its seventh century.

“The college gowns, proposed, developed and partly funded by the student body themselves, represent a tangible move forward in making postgraduates a more visible and recognisable community at St Andrews.”

“This was something that postgraduates wanted for events such as debates, pier-walks and formal academic functions. The gowns look absolutely smashing.”

The undergraduate red gown was first introduced in 1672 to distinguish students from locals and allegedly to deter local barkeeps from serving the students, who were often young teenagers, from partaking of a beverage in between lectures.

The red gown tradition died out but was reintroduced latterly as a valuable tradition and has since become a world-recognised symbol of St Andrews.

It was thought the  600th anniversary of the University was a particularly appropriate time to introduce the new gowns.

“They will now have the chance to be visibly distinct from their undergraduate peers.”