DOZENS of Edinburgh buildings have been declared “at risk” by the body which acts to protect Scottish landmarks.

Forty-six properties have been placed on the register by the Royal Commission on the Ancient and Historical Monuments of Scotland (RCAHMS) in the past month.

This means that the properties are either listed buildings or in a conservation area and are lying empty, suffering from neglect, have structural issues, are open to the elements or at risk of demolition. 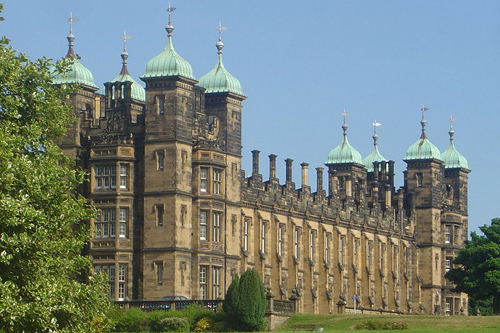 The Playfair-designed Donaldson’s College has lain empty for years

The list of buildings on the register includes iconic properties such as Donaldson’s School for the Deaf and St Paul’s Church in Leith.

A graveyard watchtower built in 1820 to deter bodysnatchers in the city’s New Calton burial ground is also at risk. A recent report spoke of fire damage and boarded windows at the structure.

The new additions to the list include seven A-listed, 14 B-listed and five C-listed properties.

It is the first time in six years that RCAHMS has reviewed buildings in the capital.

Alex Adamson, of RCAHMS, said: “This survey was carried out so as to bring the register up to date, as the last complete report we compiled was back in 2006.

“The register is compiled so as to raise awareness of a property so that sound decisions can be made based on detailed evidence.”

The Donaldson’s building, designed by Georgian architect William Henry Playfair,  was bought by developers Cala Homes eight years ago but a new buyer is currently being sought after work stalled.

A spokesman for Cala Homes said: “Donaldson’s College is an iconic building and, as such, we invest a great deal of time and resources in ensuring it remains in a good state of repair.

“To this end, we employ 24-hour security as well as carrying out regular surveys on the state of the building.”

He added: “We have had a lot of global interest in the building but no deal has been agreed yet.”

A copy of the RCAHMS report has now been given to the city council.

A spokeswoman for Edinburgh City Council said: “Progress is already being made to improve many of these buildings and, where no action is being taken, we will prioritise the rest based on the resources we have available to us.

“Council officers make contact with owners and, in most cases, an amicable conclusion is reached to improve the buildings. If not, the council will use its legislative powers to ensure owners make their buildings wind and water tight.”