TRANSPORT Minister Keith Brown today delivered an early Easter boost for passengers when he announced a £30million programme of improvements for railway stations across Scotland.

The decision was widely welcomed by passenger groups and business leaders.

The package could see new stations delivered across the country where there is sufficient demand, as well as improved access and better facilities for some existing stations. 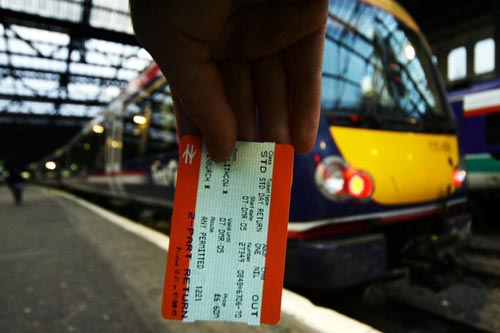 The funding was announced by Mr Brown on a visit to Alloa Railway Station which opened in 2008 and has seen passenger numbers grow to around 400,000 per year.

Mr Brown said: “This Government is committed to investing in rail, and since 2007 we have opened new stations at Alloa and Laurencekirk, and a further three at Blackridge, Caldercruix and Armadale as part of the new £300million Airdrie-Bathgate rail link which opened in 2010. Another seven stations will be built as part of the Borders railway project.

“The £30million Scottish Stations Investment Fund will give existing stations a major makeover and see the Scottish Government put money towards new stations alongside local authorities, transport partnerships and developers.

“New and better stations are a major part of attracting more people onto our rail services and providing sustainable, integrated and cost-effective alternatives to the private car as well as supporting jobs in the construction sector.

“The Scottish Government is investing £426million this year in rail infrastructure- the highest since rail devolution – and since 2007 we have invested £2.6billion and funded 30,000 extra seats a day.  I believe that passengers, the rail network and the wider economy will benefit significantly from this bumper package.

“We know that demand for rail is increasing – First ScotRail passenger numbers have risen by 25 per cent since 2004 and Glasgow Central Station is now the busiest station outside of London. In fact three out of the 10 most used stations outside of London are in Scotland. And we believe that demand will continue to grow over the coming years – so we must lay the foundations now.

“I look forward to receiving detailed proposals from communities and developers and will shortly be confirming how current or new stations can access the fund. We will continue to work with the industry to encourage innovative solutions that keep existing stations open and deliver new stations at lower cost.

“This fund will provide the flexibility required to target investment where it is most needed, improving the station facilities and accessibility which are of such vital importance to our passengers. It will enable the rail industry to work together to deliver best value for money, where appropriate taking advantage of existing or planned works at stations. And it means that local communities and regional transport bodies can be involved in the key decisions which are taken about their stations, with the opportunity for other stakeholders to invest in the improvements.”

A spokesman said: “This initiative can deliver major investment to existing stations that will bring improved facilities to passengers and the prospect of new stations will open up the rail network to more people and is to welcomed and encouraged.”

Liz Cameron, Chief Executive of Scottish Chambers of Commerce, added: “We welcome this new investment in Scotland’s railway stations.  Scotland must be seen to be an attractive place to do business and this fund provides an opportunity to increase the amenity of our railway infrastructure, creating jobs in the process.

“This investment has the potential to add considerable amenity to our rail network in Scotland.”