A TERRIFIED Scots woman called animal rescuers to her home – after mistaking a draught excluder for a snake.

The woman, who has not been named, called the Scottish Society for the Prevention of Cruelty to Animals after discovering the “animal” in loft of a house she had just rented.

The distressed woman was met at the Aberdeen property by Animal Rescue Officer Karen Hogg who discovered the “snake” was no more than a means to keep homes warm. 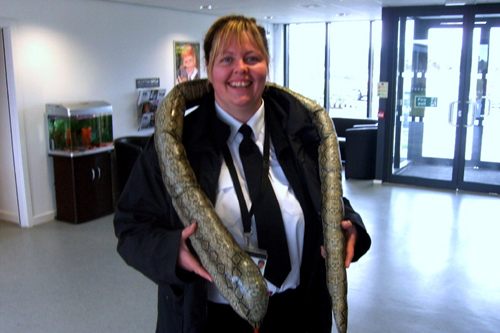 The large green and black snake-shaped draught excluder with a red felt tongue has since been nicknamed Sid and taken up residence in the charity’s Aberdeen office.

Officer Hogg said, “We’ve rescued hundreds of snakes from properties in all sorts of unusual circumstances, so we had no reason to believe this might not be the real thing.

“I’d brought gloves and a pillow case to enable us to handle and contain the snake safely, but as soon as we spotted it we realised the equipment wouldn’t be necessary.

“The poor lady was still very shaken, even after we’d removed the stuffed animal from the property.

“This callout really made us smile and given that we deal with cruelty and neglect day in day out, it was refreshing to go to a job where the ‘animal’ was completely unharmed.

“Sid is now a permanent resident at our Aberdeen Animal Rescue and Rehoming Centre where we are sure he will keep our office nice and cosy.

“Although this incident turned out to be a false alarm, we’d always encourage the public to call our helpline on 03000 999 999 if they believe an animal is in distress.”