A SCOTS rescue helicopter has rescued seven people from a ship which ran aground in Wales.

The Royal Navy Sea King helicopter from HMS Gannet in Prestwick, Ayrshire was first on scene at around 9.50pm yesterday after the cargo vessel ran aground.

The crew winched five of the seven crew off the foundering ship before sustaining damage to the aircraft’s winch at 10.41pm – leaving two crew members and a Royal Navy aircrewman on board. 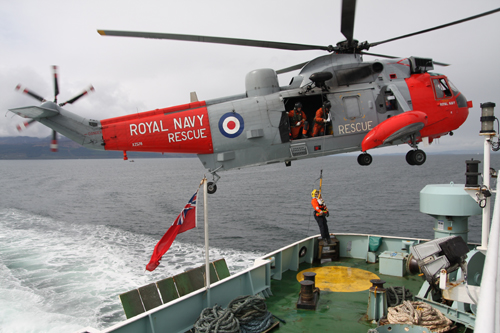 At around 12.35am the duty aircraft from RAF Leconfield in North Yorkshire took over and rescued the remaining ship’s crew and the Royal Navy Winchman.

Both helicopter crews had to negotiate significantly adverse conditions on their way to the scene and during the rescues.

The helicopter from RAF Leconfield battled against in snowy conditions and was forced to fly low to use both roads and railways for visual references.

The drama unfolded last night after the 82 metre ship struck rocks in the grip of a Force 9 severe gale at approx 8.20pm.

Already in the air after a previous call out, the duty crew of HMS Gannet’s Sea King helicopter was diverted to the incident – refuelling at RAF Valley before arriving on scene.

The ship was aground close to Raynes Jetty at Llanddulas near Colwyn Bay and two lifeboats were also in attendance.

It had initially been intended to winch the crew members clear and deliver them to a safe landing site at North Wales Police Headquarters in nearby Colwyn Bay, but HMS Gannet’s crew had reported what they thought was a small fire on board the vessel – this later turned out not to be the case.

With the risk of fire, the precaution was taken to close the adjacent A55 to allow the helicopter to rapidly winch and then land on the road to disembark those rescued as quickly as possible.

Each of the five people was lifted in a separate winch – the final winch catching on a light on the ship. Although this was cleared, the winch was damaged and HMS Gannet diverted to RAF Valley to have it repaired.

“Sea spray from the waves was being whipped up to a height of about 60ft in places and we were in the hover at about 80ft, so it was quite nerve-wracking.

“We put Petty Officer Mike ‘H’ Henson down on the deck of the vessel and he then quickly packaged the first four members of the crew in separate winches.

“We dropped them off on the A55 to a waiting ambulance and returned for the remaining three crew and our Winchman. Unfortunately we were only able to complete one lift on this second run before the winch was damaged.”

The RAF Sea King crew from Leconfield was scrambled to North Wales immediately after they had delivered an injured seaman to Hull Royal Infirmary at around 9.45pm.

The weather over the Pennines was extremely poor.

Aircraft captain Flt Lt Greg Lings said: “With low cloud, snow and the icing level we couldn’t fly over the bad weather so we were forced to literally hover-taxi for over an hour with only 500m visibility over the M62 from Goole to Manchester.”

“Flt Lt Chris Palgrave did an amazing job getting us to the scene and Sgt Jim Bethell recovered the stranded RN winchman and the remaining two crew members  to the aircraft.”

Exchange Royal Navy co-pilot, Lieutenant James Bullock who flew the Sea King during the rescue, said: “Firstly we had to locate the boat in poor visibility due to the snow.

“We found it pinned against the embankment of the A55 by the high winds which made the recovery of the remaining crewmen more difficult because of the angle we had to hover at due the turbulent and bumpy conditions.”

The RAF Sea King landed on the A55 to hand over the ship’s crewmen to waiting ambulances before recovering to RAF Valley to spend the night.

For the HMS Gannet crew, it was Petty Officer Mike ‘H’ Henson’s first shift as a qualified search and rescue aircrewman. He had transferred from Merlin helicopter.

In total he rescued 14 people yesterday – nine in a previous call out to hillwakers lost on Ben MacDui, the UK’s second highest mountain, in the Cairngorm Range.

A total of 14 people were rescued by this duty HMS Gannet crew in the course of three call outs yesterday – on Ben MacDui, in North Wales ship and a further call to a stricken yacht between the Isle of Man and Holyhead where they were later stood down.