A NEW investment will see a further 26 low carbon vehicles added to the Scottish bus fleet.

The successful bidders from the second round of the Scottish Government’s Green Bus Fund are announced today. 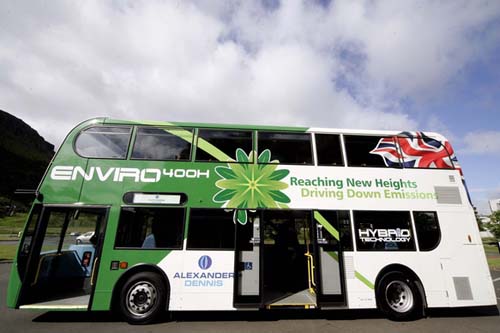 The money is to be spent on greener public transport

The operators will each receive a Scottish Government grant towards the upfront costs of buying new low carbon buses.

Transport Minister Keith Brown announced the funding awards during a visit to the Henderson’s Travel depot in Hamilton, Lanarkshire.

Mr Brown said: “The Scottish Government is absolutely committed to public transport in Scotland and to our ambitious climate change target of reducing carbon emissions by 42 per cent by 2020.

“I am delighted to announce this latest round of Scottish Green Bus funding, coming as it does at a time when we are facing real terms Westminster cuts to Scotland’s budget.

“This is another clear indication of our support and commitment to the bus industry in Scotland.

“Early indications from the use of vehicles bought in the first phase are showing substantial fuel savings and reduced emissions.

“This round of investment will build on these successes and commits further funding to help our bus industry invest in the latest emission-reducing technology.”

Building on that success, the second tranche of funding provided further opportunities to add eco-friendly vehicles to bus fleets. The investment will also help stimulate demand for green technology in Scotland.

A mix of both large and small bus operators are benefitting from SGBF2 and the 26 new low carbon buses will be spread throughout Scotland: Edinburgh, Dundee, Airdrie/Cumbernauld, Banff/Buckie/Keith and Dumfries.

Henderson’s Travel boss John Henderson said: “We are very pleased to have have received a grant from The Scottish Government’s Green Bus fund 2, which will allow us to purchase another hybrid vehicle.

“This will bring our number of hybrid buses to seven in our fleet of 52 vehicles.

“These hybrid vehicles are central to our policy of operating economical, environmentally friendly vehicles which is particularly important during these times of high fuel prices.”

Edinburgh-based Lothian Buses confirmed that the Double Deck Hybrids they bought in the first SGBF is producing a fuel efficiency of 56.7% improvement over the standard diesel vehicles previously used on route number 10.

Managing Director Ian Craig said: “As a company, we are always looking for ways to offer greener and more sustainable travel to our passengers.

“This funding from the Scottish Government’s Green Bus Fund will allow us to invest in a new fleet of greener buses that will help Scotland achieve its carbon reduction targets, and offer a low-carbon public transport option.”