A CAT is recovering after being dumped next to garages in Stirling.

The young male animal was found in a housing estate in Banknock, Stirling.

The Scottish SPCA was called to rescue the one year old male grey and white tabby cat after a member of the public spotted him in a plastic cat carrier on the ground last Wednesday. 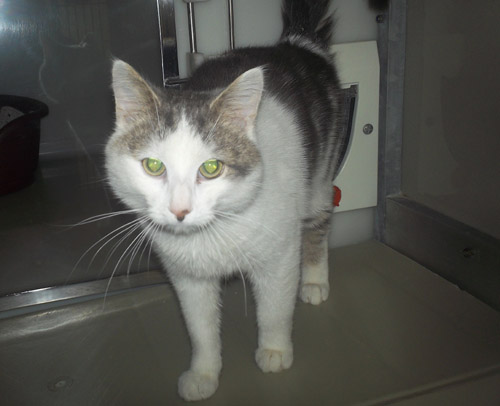 Flash was found by a dog walker on Wednesday

Animal Rescue Officer Jenny Hamilton collected the frightened puss and took him to the Scottish SPCA’s Lanarkshire Animal Rescue and Rehoming Centre in Hamilton, where staff have named him Flash.

Officer Hamilton said, “We are keen to trace the person who dumped Flash outdoors in a blue and white cat carrier, possibly on the Tuesday evening or very early Wednesday morning.

“The area he was abandoned in was right next to a block of garages so he could easily have been hit by car as the carrier was just lying on the ground.

“Luckily a dog walker spotted him inside the carrier at 7am in the morning. When she returned at 9am after the school run and saw he was still there she did the right thing by calling us for help.

“Flash is in good bodily condition and he’s a friendly boy so it’s obvious he’s been someone’s pet up until recently.

“We are now looking to find him a loving home where he will receive the care and attention he deserves.”