POLICE are warning people who carry BB guns, air weapons or replica guns in public that they are putting themselves in real danger, as well as breaking the law.

Yesterday a 15-year-old boy was reported to the authorities for allegedly causing the public fear and alarm by being in possession of a BB gun in a public place in Inverness.

Northern Constabulary say that not only is it an offence to carry or brandish such weapons in public, but could result in the deployment of fully trained firearms officers to the scene. 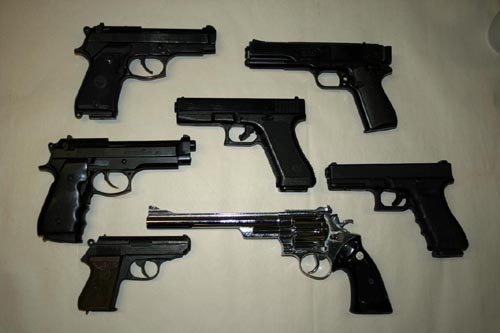 Just one of these weapons is real – but could you tell which one?

There have been cases in other areas of the UK where even highly trained ballistics experts have had to inspect a weapon to establish whether or not it is real.

Inspector Willie MacLennan from the Operational Support Unit, which oversees the Force’s Firearms Unit, said: “Some of these weapons, particularly BB guns, look very real and a member of the public will quite rightly feel intimidated and alarmed if they see such weapons being carried in public places.

“The message is clear. We need people, especially parents, to understand that carrying of these weapons in a public place could result in a Police firearms response and will most definitely lead to criminal charges being brought.”

Inspector MacLennan added: “People who carry such items are not thinking about the possible consequences of possessing what to all intents and purposes something that looks like a real firearm.”