Following a highly successful year since opening his first ever signature restaurant in February 2011, he has received acclamation nationwide. Earlier this year, Restaurant Mark Greenaway was awarded the coveted three AA rosettes– the only Scottish restaurant to be awarded the prestigious accolade this year.

Chef Mark Greenaway’s modern style of cooking with a traditional twist is confident and assured, using only the best local and seasonal produce. His signature style has elevated the reputation of No.12 Picardy Place to a whole new level, achieving a number of awards and outstanding reviews across the board since opening last year. 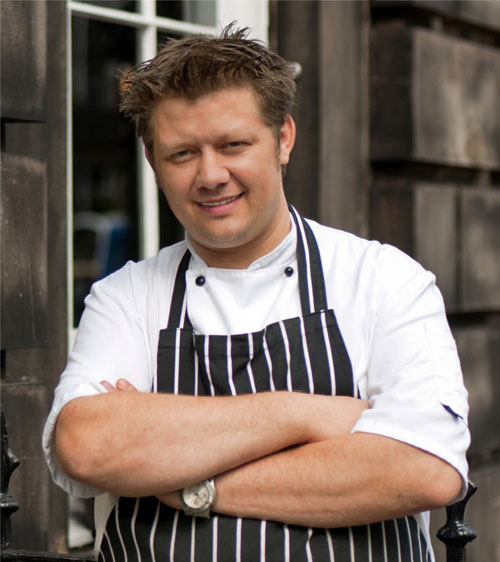 Twenty-four of the country’s finest chefs, including two other Scots who have eateries based in England, will compete in eight regional heats for the once-in-a-lifetime opportunity to create a world-beating four course menu at a prestigious event at the Old Royal Naval College in Greenwich. British Olympic legend Sir Steve Redgrave will host the gala event with a glittering guest list of British sporting greats.

Three chefs from each region and nations will compete against each other preparing a four course meal fit for an Olympian to secure a place in the national finals. The eight regional winners will then battle it out to prepare one of the four courses of The Olympic Feast.

Nicola Moody, Director of Factual Programmes, Optomen TV, says: “First class chefs and Olympic athletes have lots in common. Olympians push every boundary of their sport to become winners and chefs work just as hard at their art and are no less determined. Every chef competing in Great British Menu wants to win and cooking a dish at the final banquet. Doing so will be their Gold Medal.”