HORSES are being abandoned in record numbers in Scotland because their owners can’t afford to look after them, charities have warned.

Rescuers have reported cases of “shocking neglect” in recent years, as well as people making the “heartbreaking” decision to give up horses, as they can no longer cope with the spiralling costs of caring for them.

Shocking new figures from the SSPCA show that the numbers of reported cases of horse and pony abandonments have rocketed in the past ten years. 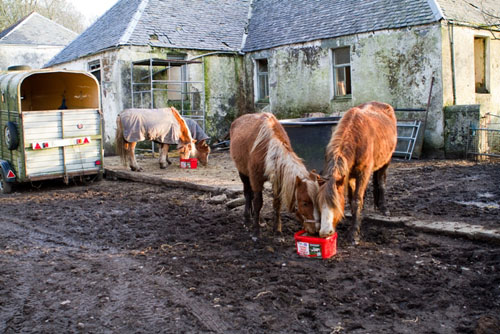 Some owners can’t care for their horses because they are too expensive.

Official statistics show that seven times as many horses and ponies were abandoned in 2011 compared to 2001.

Dave Udale, office manager at the charity, which is based near Forfar, Angus, said that since the recession hit they had received calls from members of the public who feared they could no longer afford to care for their horses.

He said: “In the years since the recession it is something that we have been very conscious about, we get a lot of phone calls from people who are worried they can’t look after their horses anymore and call us up for help.

“People are very concerned about their own horses’ welfare and try to rely on charities for help. Unfortunately because of the current economic climate everybody is in the same boat, and we as a charity are also struggling financially. 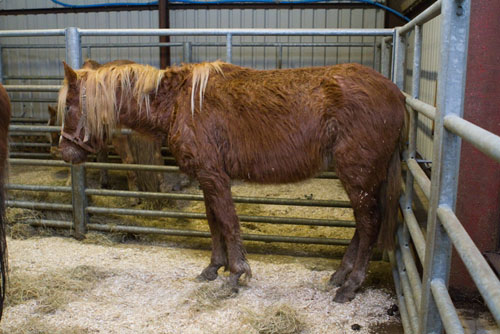 Charities warn they can’t afford to take in anymore horses.


Margaret Ross, welfare officer with the British Horse Society in Scotland has been caring for one-year-old foul Poppy after she was abandoned at a couple of days old at Matalan car park in Kilmarnock.

Poppy was found cold and shivering in a box on April 29, 2010 and Ms Ross said abandoned horses were becoming a “huge problem” for Scotland.

She said: “It is a huge problem and charities don’t have the finances to deal with it. I more people were aware of the problems then maybe people could take horses in and we could find more places to re-home horses.

“People seem to think it is ok to put horses out in fields and they’ll be fine, so people leave them and the horses do not fare well. People are telling us that they can no longer afford to keep horses; it has become a massive problem in Scotland.

Gemma Taylor, horse re-homing co-ordinator at Blue Cross, said: “Horses are being given up or abandoned in huge numbers, especially since the recession, as the price of looking after them soars and people can no longer afford to keep them. There is an unprecedented welfare crisis facing these animals and there is more demand for our services than ever.

“We have seen some shocking cases of neglect in recent years, as well as people making the heartbreaking decision to give up their horse because they just cannot cope any more.

“At the same time we are struggling to find homes for our horses, especially our lead-rein ponies which make great first ponies for children, and our companion horses, and we are pleading with people who are looking for a horse to come to us.”

Scottish SPCA Chief Superintendent Mike Flynn said: “We are aware that due to the difficult economic climate a number of people can no longer meet the expense of keeping their horses and ponies.

“We have to stress that abandoning an animal is never an option. It’s a criminal offence that carries a penalty of up to £5,000 and six months in prison.

“For owners who are at the point of giving their horse or pony up, re-homing responsibly may be the best option.”

Helena Mauchlen, development officer for the British Horse Society in Scotland said: “While we do see occasional abandonment’s in Scotland, we are lucky we don’t have as big a problem as the rest of the UK.”