A MEDIEVAL pilgrimage route to major historic religious site is to be resurrected – and organisers hope it will grow to rival a similar event in Spain.

The Way of St Andrews  will allow travellers to a route taken by 11th  and 12th century Christian devotees who flocked to the Fife town, once home to the largest church in Scotland.

Those behind the trail hope the 62 mile trip, starting from St Mary’s Cathedral in Edinburgh,  could prove as popular as the Camino de Santiago de Compostela in northern Spain. 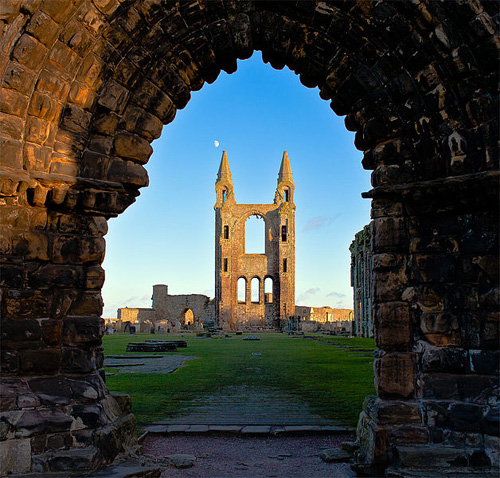 The organisers hope the route will become as popular as a similar walk in Spain  Photo: e6La3BaNo

Hugh Lockhart, a parishioner at the Edinburgh church, came up with the idea after hearing about the Spanish journey, which attracts hundreds of thousands of participants every year, and was immortalised last year in a film starring James Nisbett and Martin Sheen.

Mr Lockhart will be part of a group of 60 pilgrims who will set off from the capital in July, they will take the old route out of the city, which is known as St Margaret’s Way..

He said: “It captured my imagination, the idea of walking through the countryside and arriving at this fantastic church, and then I heard that St Andrews had once been a great place of pilgrimage before the Reformation so we decided to give it a go and see what would happen.

“The route to Santiago started with just 68 pilgrims and it now attracts over 200,000 per year. We thought it might be something that might bring people to Scotland, and we hope that after we do the first on in the summer, people will start to do the pilgrimage on their own at any time of year.”

The pilgrimage, which is set to arrive in the Fife town on July 5, even has the backing of Cardinal Keith O’Brien, who heads the Scottish Catholic Church.

Mr Lockhart said: “He was very enthusiastic about it and is keen that it be open to every one of every religion or belief as much as possible.”

The route will take in other sites of religious significance as it winds up the Fife coast.

The pilgrims will be able to visit St Fillan’s Cave in Pittenweem, home to an 8th century hermit, and Chapel Green near Lower Largo, which once was home to a small church used by pilgrims.

Mr Locakart added: “We think many of the original pilgrim routes have been turned into bus routes by now. But the route, particularly from Earlsferry up to St Andrews is almost certainly a route that pilgrims would have gone on. You get a real shiver down your spine when walking on it.”

Professor John Lennon, an expert in Travel and Tourism at Glasgow Caledonian University, said The Way of St Andrews could become an attractive tourist activity.

He said: “You have to admire the creativity and inventiveness of doing something like this.

“Walking is a major activity and a big product in Scotland. This is slightly different from the walks that people come to Scotland to do such as the West Highland Way and the Southern Upland Way because it has a pilgrimage focus.”

But he added: “I think it might be some time before those who run the Camino de Santiago de Compostela will be worried about this but given the right promotion, and given time, it could be successful.”

St Andrews stands with Ukraine in organisation of mass rally