NEW research suggests more than half (54%) of Scotland’s office workers form initial impressions of potential employers according to the look of their offices.

The research, conducted by workspace provider, Goodman, shows office aesthetics play an important role when deciding on a new employer, with more than half of those asked (51%) saying they formed an impression of a company within their first hour in the office, while just over a quarter (27%), formed impressions within the first five minutes.

The survey suggests getting simple elements right should be the first step for any company looking to attract and retain staff and ensure happiness in the workplace. 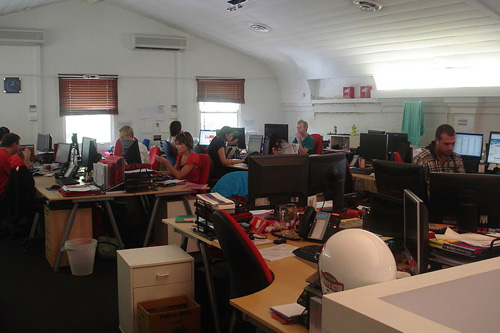 A quarter of potential employees formed a view of a company within five minutes  Photo:VeronicaTherese

Perhaps due to Scotland’s particularly changeable climate, good heating and lighting are essential for happy employees, with almost three-quarters (72%) of workers north of the border calling them a priority.

Niall McGilp, regional development director for Goodman in Scotland, said: “While some of the responses we’ve received have offered a little fun, the underlying message should serve as a serious call to action for employers across Scotland.

“Most companies will already be aware that providing up to date office equipment is important, but perhaps overlook the little things which can make a big difference to the way their staff perceive them and to their ability to attract the best employees.

“Our research shows that by simply providing good quality lighting and heating and creating a pleasant atmosphere employers can expect more motivation and ultimately greater productivity amongst their workforce.”

Office banter is also essential to maintaining positivity at work, with nearly two-thirds (67%) of those asked saying good working relationships are important, while for almost half (49%), on-site cafe facilities are a key ingredient to a good workplace.

Frustration directed at technology is commonplace in offices across the country, so it won’t come as much of a surprise to learn nine-out-of-ten (91%) workers say up-to-date computers help them feel positive at work.