Scone Palace to be restored this summer

Visitors to Scone Palace in Perthshire will have the opportunity to view history in the making this summer, as the historic archway at the Palace is restored to its former glory — more than a year after it was destroyed by a workman’s van.

The Palace’s 16th century archway was demolished in an accident which took place in September 2010.

The iconic symbol, which was all that remained of the approach to the Augustinian Abbey which once stood on the Palace lawns, was hit by a van being driven by contractors who were on site to pick up a marquee used at an event taking place in the Palace grounds. 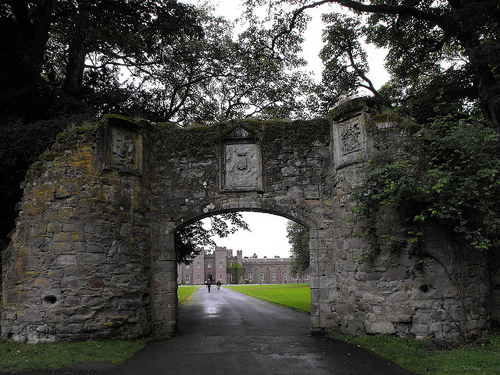 The central armorial panels, of major historical importance, were damaged beyond repair when it was hit by the vehicle — with one thrown more than 15 metres on to the palace lawns.

Experts warned at the time that repairing the intricate stone monument would be akin to completing the “world’s largest jigsaw puzzle”.

The initial phase of work to make the archway safe and to sift, record and rearrange each fragment of the wreckage was launched immediately.

The team carrying out this work was led by John Addison of Addison Conservation & Design, Midlothian.

All of the companies had significant past experience of working on heritage projects.

Following this initial remedial work a contract went out to tender to specialist masonry and building companies earlier this year.

On completion of the tender process, John Addison, one of Scotland’s most prominent structural engineers, was appointed to lead the restoration. Local company W L Watson & Sons,St Andrews has been appointed to carry out the re-building work.

Edinburgh-based sculptor Graciela Ainsworth has been tasked with restoring the stone carvings which were such an iconic feature of the arch.

The full restoration project, which started today (Tuesday 10th April), is expected to last for approximately 12 months, but it will be ‘weather dependent’, as Palace Administrator Elspeth Bruce explains:

“There’s a real window of opportunity when using the traditional lime mortar. If it is the wrong temperature it will not set properly”.

“It’s imperative to us that the archway matches the original and the techniques used to rebuild it are the same as those used back in the 16th century — though clearly we will not be using horse-drawn carts to ferry the materials!”

The opportunity to view the stonemasons at work is included in the grounds entry fee to the Palace.