Media coverage surrounding the use of fertiliser in recent days has fuelled concerns that farmers will be unable to use fertiliser on sloping ground, effectively rendering it useless.

However, Mr Lochhead stressed this was not the case. The proposed amendments to the general binding rules of the Water Environment (Controlled Activities) (Scotland) Regulations 2011 will simply bring these rules into line with current CAP cross compliance regulations which came into effect on January 1. The impact on farmers is expected to be minimal. 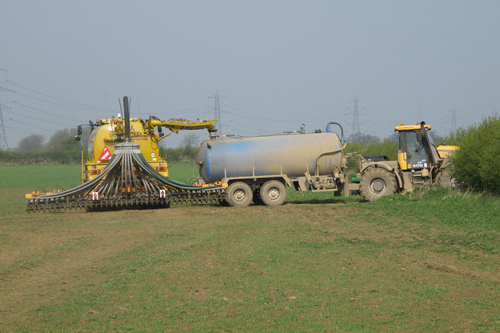 A statutory 28-day consultation on the proposed changes was launched on 8 March and key stakeholders, including NFUS, were notified. The consultation is now closed and 81 responses have been received which will now be analysed and considered in detail. Senior government officials will also meet NFUS representatives tomorrow (Wednesday) where they will address their concerns.

Mr Lochhead said: “These rules are about preventing nitrogen from fertilisers entering water and harming our environment. The amendments we are making to our water environment regulations will simply bring them into line with EU cross compliance rules, which farmers must comply with to receive their Single Farm Payment.

“Whilst these are EU regulations, I am very conscious of the need to ensure that the way we implement them in Scotland is proportionate and does not add any unnecessary burden or deliver any unintended consequences.

“These should not have a significant impact on many farmers, particularly as there is already a requirement for a fertiliser-free buffer zone around any water course. Indeed, there will be no additional burden on farmers beyond the effort required to comply with the EU rules.

“The EU rules which came into force on January 1 require farmers to consider range of issues, including the slope of their land, to minimise the risk of nitrogen entering the water.

“Farmers who responsibly follow existing best practice should not be troubled by the new regulations – though those with steeply sloping land, which drains directly into a burn or stream, will require to take extra care.

”We will reflect on the representations made as we decide how to move forward.”