DOZENS of Scots youngsters were left heartbroken – after the Easter Bunny’s sat nav got him lost.

But many of the youngsters were left empty handed after Marvo the giant rabbit was delayed due to heavy traffic and problems with his sat nav. 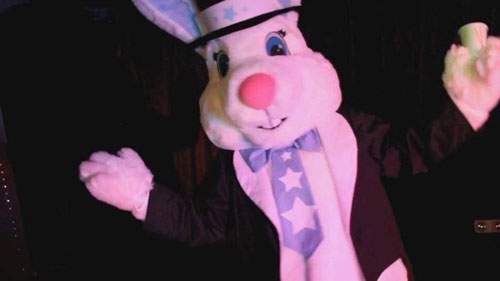 Marvo the giant rabbit was meant to deliver eggs to 42 local families.

Some children did receive their Easter treats, but only after the rabbit turned up late.

A spokesman for the Haddington company, which offered the visits at £5 a pop, has apologised to disappointed families, claiming it had been overwhelmed by the number of bookings.

Dozens of angry parents have taken to the For Sale or Wanted in East Lothian Facebook group, where the service was first advertised, to voice their fury.

She said: “It almost broke my heart to see her wee face.”

June Greig, who runs the Facebook group, said the site had received hundreds of angry comments. She said: “I think they just had too many people on the schedule and but off more than they could chew. It’s a shame for the kids that were let down, but its all got a bit out of hand.”

A spokesman for the company, which usually lays on children’ parties, said: “We have a giant rabbit, and decided to offer an Easter egg delivery service. We weren’t expecting much interest but the demand was so high that we had to turn people down.

“We had a few delays on Saturday but we got round to everybody. On Sunday we were in Tranant there were some new housing developments, and we were using a sat nav. Some of the houses weren’t on the system, so we struggled to find them. Then there was heavy traffic in Musselburgh.

In total 11 of the 42 families who had booked the bunny did not receive a visit on Sunday, with many more facing hour-long waits.

The company has now offered to donate the unused eggs to a worthy cause and has invited charities to get in touch.

Emma Coyle was one of the lucky ones who did receive a visit, she said the bunny appeared “stressed,” he had still delighted her two-year-old daughter, Hannah. She said: “You could see he was anxious but it was good,” she said.