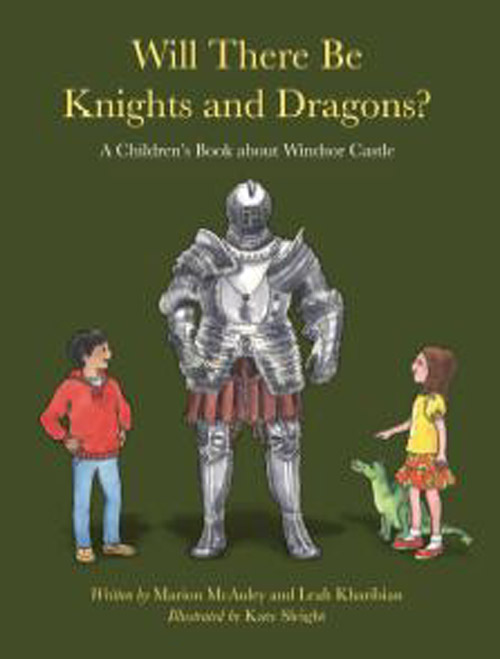 ARE there knights and dragons at Windsor Castle? Is the Round Tower really round? Are there any secret passages? How can you tell if The Queen is at home?

A new children’s book about the world’s oldest occupied castle answers all these questions, explaining the 1,000-year history of the royal residence and how it is used by the Royal Family today.

A knight takes two children on a tour of the Castle, guiding them through the State Apartments and showing them the treasures from the Royal Collection along the way. He also reveals a secret passage under the building.

The children discover that the famous Round Tower was built in that shape because round towers are more difficult to knock down than square ones, as they have no corners. The children also learn that if the Royal Standard is flying from the Round Tower, The Queen is in residence. The Union Flag is only flown when she is away.

During their tour, the children stand to attention in front of the Guard Room with some of the Guardsmen who protect the Castle day and night. They also help out in the Great Kitchen, where food is prepared for State Banquets. As they make jam tarts, they see the enormous mixer that can whisk 500 eggs at once. The pair play with the corgis and learn about The Queen’s Diamond Jubilee.

The children discover that their guide isn’t the only knight at Windsor Castle, which has been the meeting place for Knights of the Order of the Garter for more than 650 years. They even help him find his pet dragon, Nina, who was named by children from schools near Windsor and can be found hiding on every page of the book.

Jemima Rellie, Director of Publishing and New Media at the Royal Collection, said: ‘This book introduces children to centuries of British history as encapsulated in the biggest and oldest occupied castle in the world. It is packed with wonderful photographs and fascinating facts about the building and its use by The Queen today.’

Will There be Knights and Dragons? is the second children’s book published by Royal Collection Publications. It follows Does The Queen Wear Her Crown in Bed? about Buckingham Palace.

Windsor Castle is an official residence of The Queen and has been the family home of British monarchs for almost 1,000 years. The Queen spends most of her private weekends at Windsor and takes up residence for a month in the spring for Easter Court and for a week each June, when she attends Royal Ascot and the service of the Order of the Garter. The Castle is open to the public throughout the year.

Will There Be Knights and Dragons? is published by Royal Collection Publications, priced £3.95. It is aimed at children aged 5-8.

The book is available from www.royalcollection.org.uk/shop and the Royal Collection shop at The Queen’s Gallery, Buckingham Palace.